Items related to Strategies for theory construction in nursing

Strategies for theory construction in nursing 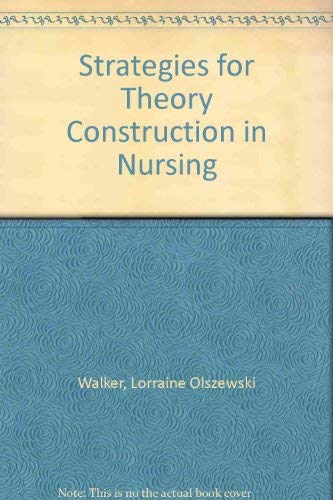 The new edition of this popular text features nursing theory development within the larger nursing context. Chapters discuss concept, statement, and theory development with recently published examples of theory strategies, emphasizing concept analytical work. Introductory chapters clarify the relevance of theory to nursing practice, while concluding chapters contain a greater emphasis on how theories can be tested for validity and utility in practice.

When this book was originally written, there was a need for the whys and hows of theory development to be expressed in nursing language. Extant texts written by sociologists and psychologists failed to translate theory development into a nursing context. Through theory development, it was widely believed, nurses affirmed the academic status of nursing and informed their practice. Thus, theory development became a distinct and valued activity.

A decade later, the state of nursing theory development and its place in academic and practice endeavors has changed dramatically. Theory development has been transformed into an activity that takes many forms, occurs at a variety of levels of abstraction, and permeates each facet of nursing. No longer is theory needed to justify and demarcate nursing: that debate has moved to higher ground. The substance of grand theories and/or conceptual models has shown that a variety of characterizations of nursing is possible, and probably desirable. Each has highlighted particular facets of the complex knowledge base needed to understand and practice nursing. In addition, phenomenon-focused theories and a host of qualitative methods have emerged and shown their value in advancing nursing theory development. In quantitatively-oriented research, as well, there is the expectation that such work will be theoretically guided and contribute to the evolution of theoretical knowledge pertinent to nursing. As a result, the phenomena of concern to nursing are increasingly articulated from theoretical perspectives relevant to and sometimes critical of nursing and health care.

Still, from the perspective of students beginning the study of theory development, its language is often a maze of terminology and principles that are new and confusing. To understand nursing's current theoretical state of development, each student must at least briefly-retrace at their own pace the steps their nursing predecessors have taken. As maps guide the traveler, so books guide the student. In this book we aim at the beginning student of nursing theory development. What is manifestly clear to the expert often is vague and disordered to the novice. In articulating basic strategies for theory development in nursing, we have sought to provide the guidance needed by the novice. One note of caution is needed: no matter how conscientiously a student applies a strategy, if the underlying concept is trivial, the theoretical outcome will have limited merit.

For the expert, we see the components of the strategies outlined here not as steps, but rather as a framework for assessing the completeness and orderliness of their work. Creative work has its own process. Sometimes that process is linear; other times it is not. At the end, however, the creative work must be expressed in a coherent and orderly form to be understood by others. For example, when dealing with large amounts of information, or ordering complex phenomena, the material on concept analysis or theory synthesis may prove useful in unsnarling ideas. Thus, we expect that experts will and should use this book differently from novices.

In this third edition we have attempted to portray theory development within the larger nursing context while preserving with clarity the basic strategies content. This third edition moves beyond earlier editions in several ways. First, we have incorporated recently published examples of the theory strategies. Examples are particularly abundant for concept analysis work. Second, we have striven to place theory development within the larger knowledge development process in nursing. New material reflecting this is contained in Chapter 13. Third, increasing diversity is evident in nursing's intellectual and practice spheres. We have tried to reflect this diversity by noting emergent philosophical views articulated by nurses (Chapters 1, 12, and 13) and expanding illustrative material to incorporate the diversity of clients cared for by nurses. Fourth, we have enlarged the consideration given to testing and validation theoretic work (Chapter 12). Most notable is the addition of new material on concept and statement testing. Finally, references have been updated throughout the book while taking care to preserve those references of historical importance and "classics" in the field.

Again, we thank those who contributed to this and earlier editions, especially Charles Bollinger. We acknowledge the assistance of the staff at Appleton & Lange in this current edition, especially David P. Carroll, Senior Editor, and Jennifer Sinsavich, Production Editor. We are especially grateful to two anonymous reviewers for a thorough and inspired review of the text. Finally, we also each wish to thank the other for the joy of a decade of colleagueship and especially for the chance to discuss theory development near the meandering waters of Salado. L.W.
Austin, Texas
K.A.
Waco, Texas

1. Strategies for Theory Construction in Nursing

Book Description Appleton & Lange. Paperback. Condition: Good. A copy that has been read, but remains in clean condition. All pages are intact, and the cover is intact. The spine may show signs of wear. Pages can include limited notes and highlighting, and the copy can include previous owner inscriptions. At ThriftBooks, our motto is: Read More, Spend Less. Seller Inventory # G0838586864I3N00

2. Strategies for Theory Construction in Nursing

Book Description Appleton & Lange. Paperback. Condition: Very Good. A copy that has been read, but remains in excellent condition. Pages are intact and are not marred by notes or highlighting, but may contain a neat previous owner name. The spine remains undamaged. At ThriftBooks, our motto is: Read More, Spend Less. Seller Inventory # G0838586864I4N00

3. Strategies for Theory Construction in Nursing