Items related to Pete (The Cowboys) 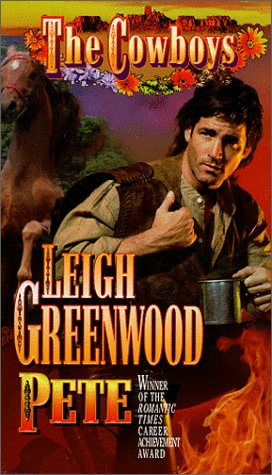 Confirmed drifter and cowboy Pete rides into the Winged T ranch determined only to get his money back, but by the end of the day, he owns the stead and is married to a beautiful woman--a dose of commitment that might prove too weighty for a free spirit. Original.

While traveling through Wyoming Territory, Pete Jernigan is robbed and left for dead. After recovering from a gunshot wound to the head, he sets out to find the two men who stole everything he owned, including his gold. His search leads him to the body and belongings of Peter Warren of Illinois. It seems Peter was on his way to claim a large cattle ranch as his inheritance when someone killed him. Pete believes that if he goes to the Tumbling T ranch, he'll find the murderers who stole his gold and killed Peter. What he doesn't count on is having to assume the identity of Peter Warren to protect Peter's wife-by-proxy. Anne Thompson is going to be forced to marry her uncle's choice for a husband if her real husband doesn't arrive and claim his inheritance. When Pete shows up and rescues Anne from her uncle and his cronies, she is amazed. This can't possibly be the same timid Peter Warren she knew as a child. It's been ten years since Anne has seen Peter and she wants to believe that this strong, handsome and protective man is her husband. Leigh Greenwood is back with another heartwarming book in The Cowboys series. Like his cowboy brothers, Pete is a wonderful hero. He arrives at the Tumbling T with the intention of finding his gold and moving on, but he soon gets caught up in Anne's life. Anne is a refreshing delight as Pete's innocent young bride. She is desperate for love and affection and Pete helps her blossom into the self-assured woman he knows she can be. The author has crafted a real winner with Pete and readers will be happy to add this cowboy to their collection. Leigh Greenwood delivers the best in western historical romance! Make room on your keeper shelf! You won't want to miss a single book in The Cowboys series! When it comes to romance, Leigh Greenwood is a name to remember! Kristina Wright -- Copyright © 1999 Literary Times, Inc. All rights reserved -- From Literary Times