Items related to Rumble on the Bayou

DeLeon, Jana Rumble on the Bayou

Rumble on the Bayou 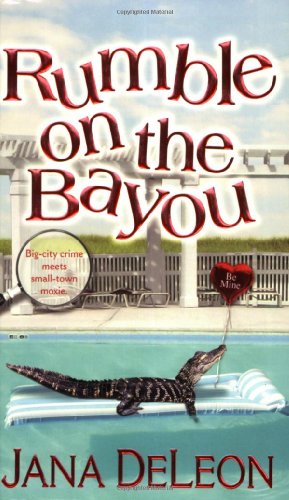 In the town of Gator Bait, Louisiana, all heck breaks loose when an alligator found in the town drunk's swimming pool is stoned on heroin and hunky DEA agent Richard Starke arrives to investigate--much to the chagrin of Deputy Dorie Berenger, who thinks he's too handsome for her own good. Original.

GATOR AID Deputy Dorie Berenger knew it was going to be a rough day when the alligator she found in the town drunk’s swimming pool turned out to be stoned. On heroin. Now she has some big-shot city slicker from the DEA trying to take over her turf. And Agent Richard Starke is everything she’d feared—brash, demanding and way too handsome for his own good. Or hers.

The folks of Gator Bait, Louisiana, may know everything about each other, but they’re sure not going to share it with an outsider. Richard wouldn’t be able to catch a catfish, much less a drug smuggler, without Dorie’s help. But some secrets—and some desires—are buried so deep that bringing them to the surface will take a major RUMBLE ON THE BAYOU.

New York Times and USA Today bestselling author Jana DeLeon was raised in southwest Louisiana among the bayous and gators. Her hometown is Carlyss, but you probably won't find it on a map. Her family owned a camp located on a bayou just off the Gulf of Mexico that you could only get there by boat. The most important feature was the rope hammock hanging in the shade on a huge deck that stretched out over the water where Jana spent many hours reading books. Jana and her brother spent thousands of hours combing the bayous in a flat-bottom aluminum boat, studying the natural habitat of many birds, nutria and alligators. She would like you to know that no animals were injured during these "studies," but they kept makers of peroxide in business. Jana has never stumbled across a mystery or a ghost like her heroines, but she's still hopeful. She now resides in Dallas, Texas, with the most spoiled Sheltie in the world.

1. Rumble on the Bayou

2. Rumble on the Bayou

3. Rumble on the Bayou

4. Rumble on the Bayou DeLeon, Jana