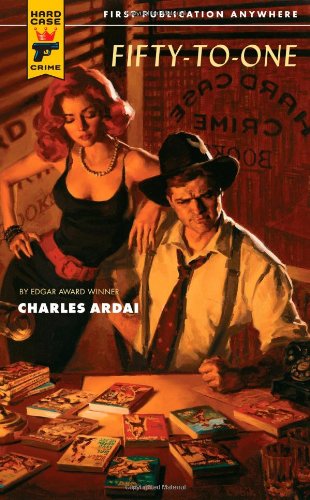 When he releases a supposedly nonfiction account of a heist at a Mob-run nightclub, which had actually been written by an eighteen-year-old showgirl, a shady book publisher and his protégé discover that living a pulp fiction novel is much more dangerous than writing them. Original.

Charles Ardai is the founder and editor of Hard Case Crime and the Edgar Award-winning author of the acclaimed novels Little Girl Lost and Songs of Innocence.

Ardai, publisher of Hard Case Crime and a fine crime writer himself (usually under the pseudonym Richard Aleas), wears both hats in this celebration of his still-young company’s fiftieth book (this one). Here’s how Ardai explains what he calls the novel’s insane premise: “to publish a 50th book that would commemorate the (fictitious) 50th anniversary of the founding of Hard Case Crime, set 50 years ago, and to tell the story in 50 chapters, with each chapter bearing as its chapter title the title of one of our 50 books, each used in consecutive order.” Wow! The story that results tends—as one might expect—to meander quite a bit, but it’s still a perfectly entertaining, retro-style noir about the escapades of a pulp publisher and one of his authors, a comely small-town girl turned exotic dancer turned crime author, whose “nonfiction” exposé of a Mob scam turns out to be a little close to the truth. The resulting shenanigans work their way, consecutively, from Grifter’s Game to Fifty-to-One, with 48 chapters in between. Too clever for mere mortals but good fun. --Bill Ott