Items related to The Choice of the People?

Best, Judith; Cronin, Thomas E. The Choice of the People?

The Choice of the People? 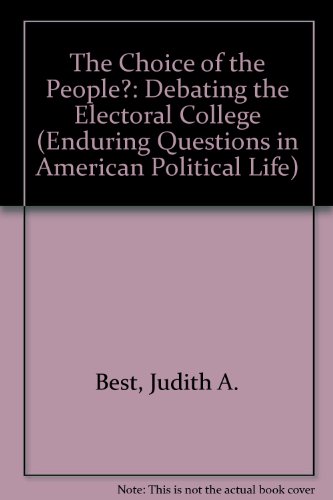 The electoral college is arguably the most important but least understood factor that determines the President of the United States. This book brings together the ideas of today's most prominent supporters, critics, and opponents of the electoral college. Along with critical documents that provide historical background and demonstrate the evolution of debates over the legitimacy of this American institution, Judith Best and Thomas E. Cronin together with the testimony of Lawrence D. Longley, analyze the electoral college from a variety of perspectives and propose a wide range of alternatives, from maintaining the status quo to imposing radical reform. Among the issues addressed by these essays and documents is the fate of third parties in presidential elections.

Judith Best is distinguished teaching professor of political science at the State University of New York at Cortland.

[This] careful analysis of the multidimensional arguments that have swirled around the electoral college for two centuries is presented clearly and cogently . . . should be read carefully by those familiar with the debate and especially by those who are not. (Pfiffner, James P.)

A comprehensive, valuable work for all students of the American governmental system. (R. Gordon Hoxie)

It is probably asking too much to expect this volume to put an end to the perennial debate over the electoral college, but it does lay out the arguments, both for and against it. And if, on balance, its proponents make the better case, so be it. (Berns, Walter)

A rich collection of essays and reference information enlivening the continuing debate over how to elect the people's president. (Longley, Lawrence D.)

It is altogether an attractive teaching package. (Booknotes)