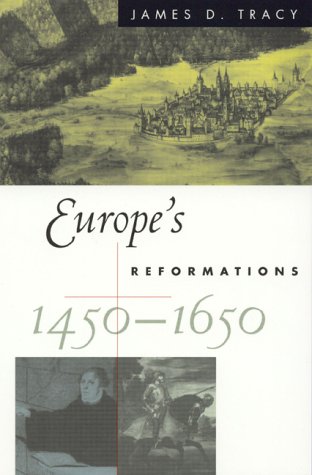 Europe's Reformations establishes a new standard for historians of the early modern era. In recent decades, Reformation scholars have dismantled brick by brick the idea that the Middle Ages came to an abrupt end in 1517, with Martin Luther's Ninety-five Theses. Prominent historian James D. Tracy is the first scholar to effectively synthesize this new understanding of the profound continuities between medieval Catholic Europe and the multiconfessional sixteenth and seventeenth centuries. Tracy illustrates how Reformation-era religious conflicts tilted the balance in church-state relations in favor of the latter, so that the secular power was able to dictate the doctrinal loyalty of its subjects. Religious reform, Catholic as well as Protestant, reinforced the bonds of community, while creating new divisions within towns, villages, neighborhoods, and families. In some areas these tensions were resolved by allowing citizens to profess loyalty both to their separate religious communities and to an overarching body-politic. This kind of society, a product of the Reformations, though not willed by the reformers, was the historical foundation of modern pluralism. Written in an engaging and accessible prose, this book belongs in the library of all scholars, students, and general readers interested in the origins, events, and legacy of the early modern period. Visit our website for sample chapters!

James Tracy is the Union Pacific Professor of Early Modern History at the University of Minnesota.

The book is clearly the culmination of a lifetime of research activity by a well-known and respected scholar. The scholarship is first rate, a tour de force especially when dealing with Erasmus, Luther, Calvin and Zwingli [and] Tracy's coverage of Dutch and Swiss religious history is exquisite. (Elizabeth Furdell, University of North Florida)

The scholarship is impressively solid. Tracy's range of knowledge never ceases to amaze, both in regard to the variety of specialized books he has written, and in regard to the background needed to write this kind of synthesis. He imposes a new order on existing information while adding fresh details not seen in other textbooks of the period. (Craig Harline, Brigham Young University)

This is the 'new' history of the Reformation at its best. Tracy skillfully integrates the reconceptualization of Christian belief, critical accompanying developments in the political arena, and profound repercussions within people's everyday lives. It is a lively story, told in elegant language, and strengthened by particularly apt illustrations. (Raymond A. Mentzer, Professor of history at Montana State University and editor of Sixteenth Century Essays & Studies)

Solidly researched and artfully written, this volume stands as a work of original scholarship. This study could be useful in upper-divisional and graduate-level courses on Reformation Europe. (David J. Kovarovic History)

In this excellent survey, James Tracy provides a concise and balanced account of what he trems the "religious revolution of the sixteenth century." Tracy is a well-respected professor of history at the University of Minnesota and brings years of scholarly work on early modern Europe to his account of the complicated developments of the Reformation period. Lively and readable prose. A lucid account of the Reformation's medieval roots, sixteenth century climax, and often-unintended religious, social, and political consequences, Europe's Reformations represents an outstanding introduction for both students and non-specialists. (Jason P. Coy, UCLA Comitatus, A Journal Of Medieval and Renaissance Studies)

James D. Tracy brings a lifetime of study of Erasmus and the Netherlands to a wise and useful survey of the Reformation in an American textbook series. He has produced an attractively and sensitively illustrated book. (History Today)

Historians have long endeavored to define the Reformation. Further disagreement is found in attempts to specify a time period for the Reformation. James Tracy, however, has successfully found a way to do it by first recognizing and then embracing the multiformity of the Reformation. (History)

Tracy is especially skillful in handling complex theological and political developments and gives adequate coverage to social and economic issues. The book includes a fine series of illustrations, a brief coda comparing the European Reformations with other movements of religious reform around the world such as Neo-Confucianism, and a fifteen-page bibliography of works in English. (Religious Studies Review)