Items related to The Catcher in the Rye

J. D. Salinger The Catcher in the Rye

The Catcher in the Rye 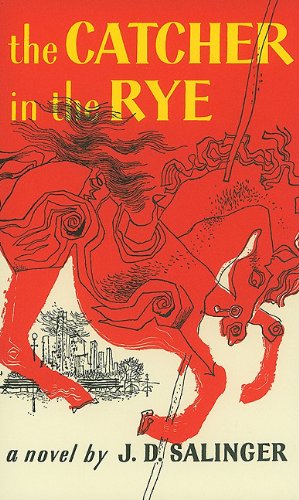 A 16-year old American boy relates in his own words the experiences he goes through at school and after, and reveals with unusual candour the workings of his own mind. What does a boy in his teens think and feel about his teachers, parents, friends and acquaintances?

Since his debut in 1951 as The Catcher in the Rye, Holden Caulfield has been synonymous with "cynical adolescent." Holden narrates the story of a couple of days in his sixteen-year-old life, just after he's been expelled from prep school, in a slang that sounds edgy even today and keeps this novel on banned book lists. It begins,


"If you really want to hear about it, the first thing you'll probably want to know is where I was born and what my lousy childhood was like, and how my parents were occupied and all before they had me, and all that David Copperfield kind of crap, but I don't feel like going into it, if you want to know the truth. In the first place, that stuff bores me, and in the second place, my parents would have about two hemorrhages apiece if I told anything pretty personal about them."

His constant wry observations about what he encounters, from teachers to phonies (the two of course are not mutually exclusive) capture the essence of the eternal teenage experience of alienation.

J D Salinger was born in 1919. He grew up in New York City, and wrote short stories from an early age, but his breakthrough came in 1948 with the publication in The New Yorker of 'A Perfect Day for Bananafish'. The Catcher in the Rye was his first and only novel, published in 1951. It remains one of the most translated, taught and reprinted texts, and has sold some 65 million copies. It was followed by three other books of short stories and novellas, the most recent of which was published in 1963. He lives in Cornish, New Hampshire.

1. The Catcher in the Rye

Book Description Amereon Ltd. Hardcover. Condition: GOOD. Has little wear to the cover and pages. Contains some markings such as highlighting and writing. Seller Inventory # 0848832914_abe_gd

2. The Catcher in the Rye

Book Description Amereon Ltd, 1951. Condition: Good. A+ Customer service! Satisfaction Guaranteed! Book is in Used-Good condition. Pages and cover are clean and intact. Used items may not include supplementary materials such as CDs or access codes. May show signs of minor shelf wear and contain limited notes and highlighting. Seller Inventory # 0848832914-2-4

3. The Catcher in the Rye

Book Description Amereon Limited, 1951. Condition: Good. Shows some signs of wear, and may have some markings on the inside. Seller Inventory # GRP112877026

4. The Catcher in the Rye

Book Description Amereon House 1951-09-01, 1951. Hardcover. Condition: Good. Item is in good condition. Some moderate creases and wear. This item may not come with CDs or additional parts including access codes for textbooks. Might be an ex-library copy and contain writing/highlighting. Seller Inventory # DS-0848832914-3

5. The Catcher in the Rye

6. The Catcher in the Rye