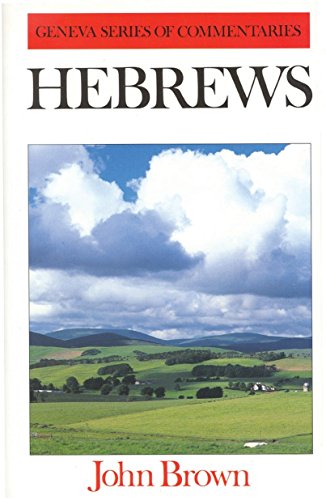 Commentaries generally belong to one of two categories. Either they aim at a devotional thoroughness which lays no great emphasis on the exact meaning of individual words, or they concentrate on such a detailed examination of the text that the spirit and power of the book is largely lost. Among the few commentators who stand between these two positions is Dr. John Brown of Edinburgh (1784-1858).

By seeking to develop a style of exposition that was both edifying to his congregation and valuable to his divinity students, he produced commentaries which, in the words of Dr. William Cunningham, 'formed a marked era in the history of Scriptural Interpretation'. Not behind the foremost contemporary scholars in his emphasis on correct exegesis, he nevertheless sought not only that the minds of his readers might be brought 'into immediate contact with the mind of the Spirit' but that their whole being might be resigned to 'the empire of the Word of God'.

Early one morning in the year 1738 a shepherd boy, with homespun clothes and bare feet, stood at the counter of Alexander McCulloch's bookshop in the University city of St. Andrews. The startled shopkeeper was yet more surprised when he heard the youth's request; it was for a Greek New Testament. 'Boy,' exclaimed the Professor of Greek who happened to be in the shop at that moment, 'if you can read that book, you shall have it for nothing.' Soon a rather thick leather volume was in the lad's hands and to the astonishment of all present he read a passage and won his prize. By the afternoon sixteen year old John Brown was back amongst his flock on the hills of Abernethy, having walked some forty-eight miles since the previous evening to obtain his treasure.

5. Exposition of the Epistle to the Hebrews (Hardback)

7. Exposition of the Epistle to the Hebrews (Hardback)

8. Exposition of the Epistle to the Hebrews (Hardcover)

Book Description Hardcover. Condition: New. Hardcover. Shipping may be from multiple locations in the US or from the UK, depending on stock availability. 740 pages. 1.057. Seller Inventory # 9780851510996