Items related to Animals of the Surface Film (Naturalists' Handbooks) 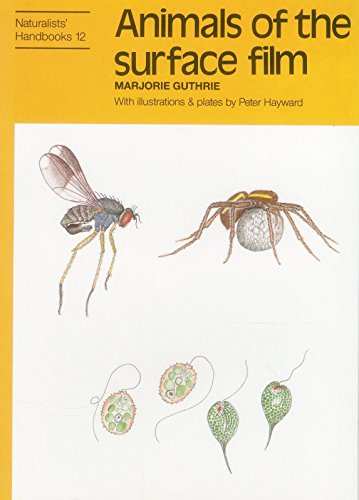 A calm water surface on any freshwater habitat can support a community of animals and plants of great interest. Some live above the water but in regular contact with it, and others hang down from the surface. This handbook deals with the smaller invertebrate animals of this surface community. Among these are springtails, pondskaters, water boatmen, water beetles and water spiders, as well as protozoa, rotifers and tiny crustaceans.

After giving a brief introduction to the surface forces that are so important to these animals, the book describes the natural history of the main groups of animals in this community, drawing attention to topics on which further investigation is needed. Consideration is given to the problem of pollution by oil and by detergent. Keys are given for the identification of surface-dwelling animals, either to the major group or, where possible, to the species. Methods of keeping and studying the animals are described.

Peter Hayward began his career as a scientific assistant at the Natural History Museum, where he was introduced to his lifelong specialism, marine bryzoa or sea-mats. He read zoology with geology at Reading University, thence to University of Wales, Swansea as research student, gaining PhD in population biology and taxonomy of sea-mats.

He is now a senior lecturer at the university, and authority on bryzoa worldwide from Antarctic to coral reefs. Author with Professor John Ryland of four volumes on marine bryzoa in Linnaean Society Synopses series. Co-ordinator of the popular Collins Pocket Guide to the Seashore, co-editor and contributor to the Handbook of the Marine Fauna of north-west Europe (1995), as well as the Naturalists' Handbooks on seaweed and sandy shore habitats. Zoological editor of Journal of Natural History.