Items related to Until Thy Wrath Be Past

Larsson, Asa Until Thy Wrath Be Past

Until Thy Wrath Be Past 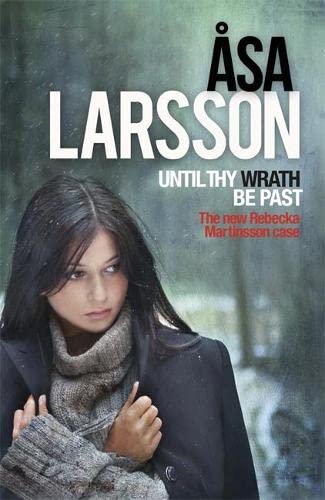 It is the first thaw of spring and the body of a young woman surfaces in the River Thorne in the far north of Sweden. Rebecka Martinsson is working as a prosecutor in nearby Karuna. Her sleep has been disturbed by haunting visions of a shadowy, accusing figure. Could the body belong to the ghost in her dreams? And where is the dead girl's boyfriend, also reported as missing the previous winter? Joining forces once again with Police Inspectors Anna-Maria Mella and Sven-Erik Stalnacke, Rebecka is drawn into an investigation that centres on old rumours about a plane carrying supplies for German troops in 1943 that never arrived. Shame and secrecy shroud the locals' memories of the war, with Sweden's early collaboration with the Nazis still a raw wound. And on the windswept shore of a frozen lake lurks a killer who will kill again to keep the past buried for ever beneath half a century's silent ice and snow.

Asa Larsson was born and grew up in Kiruna, Sweden. She is a qualified lawyer and made her debut in 2003 with The Savage Altar, which was awarded the Swedish Crime Writers' Association prize for best debut novel. Its sequel, The Blood Spilt, was chosen as Best Swedish Crime Novel of 2004. Film rights to her novels have been sold to Sandrew Metronome.

I remember how we died. I remember, and I know. That’s the way it is now. I know about certain things even though I wasn’t actually present when they happened. But I don’t know everything. Far from it. There are no rules. Take people, for instance. Sometimes they are open rooms that I can walk into. Sometimes they are closed. Time doesn’t exist. It’s as if it’s been whisked into nothingness.

Winter came without snow. The rivers and lakes were frozen as early as September, but still the snow didn’t come.

It was October 9. The air was cold. The sky very blue. One of those days you’d like to pour into a glass and drink.

I was seventeen. If I were still alive, I’d be eighteen now. Simon was nearly nineteen. He let me drive even though I didn’t have a licence. The forest track was full of potholes. I liked driving. Laughed at every bump. Sand and gravel clattered against the chassis.

“Sorry, Bettan,” Simon said to the car, stroking the cover of the glovebox.

We had no idea that we were going to die. That I would be screaming, my mouth full of water. That we only had five hours left.

The track petered out at Sevujärvi. We unpacked the car. I kept stopping to look round. Everything was divinely beautiful. I lifted my arms towards the sky, screwed up my eyes to look at the sun, a burning white sphere, watched a wisp of cloud scudding along high above us. The mountains embodied permanence and times immemorial.

“What are you doing?” Simon said.

I was still gazing at the sky, arms raised, when I said, “Nearly all religions have something like this. Looking up, reaching up with your hands. I understand why. It makes you feel good. Try it.”

I took a deep breath, then let the air out to form a big white cloud.

Simon smiled and shook his head. Heaved his weighty rucksack up onto a rock and wriggled into the harness. He looked at me.

Oh, I remember how he looked at me. As if he couldn’t believe his luck. And it’s true. I wasn’t just any old bit of skirt.

He liked to explore me. Count all my birthmarks. Or tap his fingernail on my teeth as I smiled, ticking off all the peaks of the Kebnekaise massif: “South Peak, North Peak, Dragon’s Back, Kebnepakte, Kaskasapakte, Kaskasatjåkko, Tuolpagorni.”

The rucksacks containing our diving equipment weighed a ton.

We walked up to Lake Vittangijärvi. It took us three and a half hours. We urged each other on, noticing how the frozen ground made walking easier. We sweated a lot, stopped occasionally to have some water, and once to drink coffee from our thermos flask and eat a couple of sandwiches.

Frozen puddles and frostbitten moss crackled beneath our feet.

Alanen Vittangivaara loomed on our left.

That was a side of him I loved. He knew about that sort of thing.

We finally got there. Placing our rucksacks carefully on the slope, we stood in silence for a while, gazing out over the lake. The ice resembled a thick black pane of glass over the water. Trapped bubbles traced patterns like broken pearl necklaces. The cracks resembled crumpled tissue paper.

Frost had nipped at every blade of grass, every twig, making them brittle and crispy white. Sprays of lingonberry and stunted juniper bushes were a dull shade of wintry green. Dwarf birches and blueberry sprigs had been squeezed into shades of blood and violet. And everything was coated with rime. An aura of ice.

It was uncannily quiet.

Simon became withdrawn and thoughtful, as he usually did. He’s the type who can tell time to stand still. Or was. He was that kind of person.

But I’ve never been able to keep quiet for long. I just had to start shouting. All that beauty – it was enough to make you burst.

I ran out onto the ice. As fast as I could without slipping. Then I stood with my legs wide apart and slid a long, long way.

He smiled and shook his head.

That was something he’d learnt to do in the village where he’d grown up. How to shake his head. They’re good at that in Piilijärvi.

“No way,” he shouted back. “Someone has to be here to repair your legs when you’ve broken them.”

“Cowardy cowardy custard!” I yelled as I ran and slid again.

Then I lay down and gazed up at the sky for a while. Stroked the ice affectionately.

Somewhere down below there was an aeroplane. And nobody knew anything about it, apart from us. Or so we thought.

Standing up, I caught Simon’s gaze.

Simon collected some dry juniper twigs and birch bark. So that we could start a fire and have something to eat before we made our dive. To give us the strength to keep going.

We grilled some smoked sausages on skewers. I didn’t have the patience to do it properly – mine were burnt black on the outside and raw inside. Hungry jays gathered in the trees around us.

“People used to eat them,” I said, nodding at the birds. “Anni’s told me about it. She and her cousins used to hang a length of string between the trees and thread pieces of bread onto it. The birds would land on the string, but it was so thin that they couldn’t stay upright and found themselves hanging upside down. Then all you had to do was pick them off. Like picking apples. We ought to try it – have we got any string?”

“Wouldn’t you rather have a piece of sausage?”
One of Simon’s typically marvellous sardonic comments. And no hint of a smile to show that he was joking.

I gave him a thump on the chest.

“Idiot! I didn’t mean that we should eat them. I just wanted to see if it worked.”

“No. We ought to get going. Before it gets dark.”

Simon gathered some more dry twigs and bark. And he found a hollow birch log – they burn well. He raked some ash over the glowing embers. As he said, with a bit of luck we would be able to blow the fire back to life after the dive. It would be good to be able to warm ourselves quickly when we emerged from the freezing water.

We carried our cylinders, regulators, masks, snorkels, fins and black army-surplus diving suits out onto the ice.

Simon led the way with the G.P.S.

In August we had brought the kayak, towing it through water whenever possible, along the River Vittangi as far as Lake Tahko. Then we’d paddled to Vittangijärvi. We’d plumbed the depths of various parts of the lake, and, once we finally found the right place, Simon had keyed it into the G.P.S. under the headingWilma.

But during the summer there were holidaymakers staying in the old farmhouse on the lake’s western shore.

“You can bet your life they’re all lined up with their binoculars,” I’d said, squinting across.
“Wondering what the hell we’re up to. If we dive now, everyone for kilometres around will know about it in no time.”

So once we’d finished, we’d paddled over to the western shore, beached the kayak and strolled up to the old farmhouse, where we’d been invited in for coffee. I went on about how we were getting paid a pittance by the Swedish Meteorological and Hydrological Institute for charting the depth of the lake. Something to do with climate change, I reckoned.

“As soon as they close down the holiday cottages for the winter,” I said to Simon as we struggled home with the kayak, “we’ll be able to use their boat as well.”

But then the ice came, and we had to wait until it was thick enough to bear our weight. We could hardly believe our luck when it didn’t snow – we’d be able to see through the ice. A metre or so at least. But of course we’d be diving down much deeper than that.

Simon sawed through the ice. He started by hacking a hole with an axe – the ice was still thin enough to do that – and then he used a hand saw. A chainsaw would have been too heavy to carry, and besides, it would have created a hell of a noise: the last thing we wanted was to attract attention. What we were doing suggested a book title to me: Wilma, Simon and the Secret of the Aeroplane.

While Simon was sawing through the ice, I nailed some lengths of wood together to form a cross we would place over the hole after attaching a safety line to it.

Stripping down to our thermal underwear, we pulled on our diving suits. Then we sat down at the edge of the ice hole.

“Go right down to 4 metres,” Simon said. “The worst that can happen is that we lose our air supply if the regulators freeze up. The start is the riskiest bit, just beneath the surface.”

“We might also run into trouble lower down. You can’t trust mountain lakes. There could be an inlet somewhere, causing currents. The temperature could be below zero. The riskiest place is just beneath the surface, though. So: down you go. No hanging about.”

I didn’t want to listen. I wanted to get down there. Right away.

Simon wasn’t an expert on the technical side of diving, but he’d read up on it. In magazines and on the Internet. He continued his unhurried preparations.

“Maybe we’ll find the wreck straight away, but probably not. Let’s get down there and take it as it comes.”

1. Until Thy Wrath be Past

2. Until Thy Wrath Be Past: A Rebecka Martinsson Investigation

3. Until Thy Wrath Be Past: A Rebecka Martinsson Investigation

4. Until Thy Wrath be Past: A Rebecka Martinsson Investigation