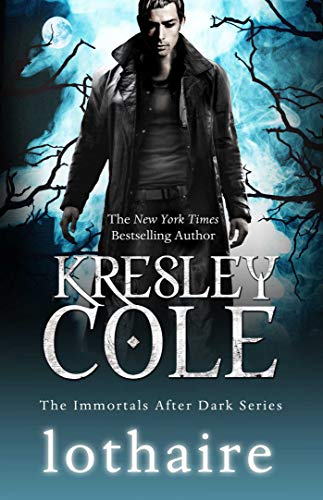 #1 New York Times bestselling author Kresley Cole continues her electrifying Immortals After Dark series with this thrilling tale, revealing secrets of the Lore, fierce realm of the immortals...ALL FEAR THE ENEMY OF OLD
Driven by his insatiable need for revenge, Lothaire, the Lore's most ruthless vampire, plots to seize the Horde's crown. But bloodlust and torture have left him on the brink of madness--until he finds Elizabeth Peirce, the key to his victory. He captures the unique young mortal, intending to offer up her very soul in exchange for power, yet Elizabeth soothes his tormented mind and awakens within him emotions Lothaire believed he could no longer experience.
A DEADLY FORCE DWELLS WITHIN HER
Growing up in desperate poverty, Ellie Peirce yearned for a better life, never imagining she'd be convicted of murder--or that an evil immortal would abduct her from death row. But Lothaire is no savior, as he himself plans to sacrifice Ellie in one month's time. And yet the vampire seems to ache for her touch, showering her with wealth and sexual pleasure. In a bid to save her soul, Ellie surrenders her body to the wicked vampire, while vowing to protect her heart.
CENTURIES OF COLD INDIFFERENCE SHATTERED
Elizabeth tempts Lothaire beyond reason, as only his fated mate could. As the month draws to a close, he must choose between a millennia-old blood vendetta and his irresistible prisoner. Will Lothaire succumb to the miseries of his past...or risk everything for a future with her?

*Sign up for Kresley's email newsletter to receive the latest book release updates, as well as info about contests & giveaways ( kresleycole.com/newsletter/ )
Kresley Cole is the #1 New York Times bestselling author of the electrifying Immortals After Dark paranormal series, the young adult Arcana Chronicles series, the erotic Gamemakers Series, and five award-winning historical romances.
A master's grad and former athlete, she has traveled over much of the world and draws from those experiences to create her memorable characters and settings.
Her IAD books have been translated into eighteen foreign languages, garnered three RITA awards, and consistently appear on the bestseller lists, in the U.S. and abroad.
You can learn more about her and her work at kresleycole.com or facebook.com/KresleyCole

"I think this is one of the few series that is actually getting better as it progresses . . . My favorite thing about these books is that Cole lets the characters act like immortals. They are so violent, so cunning and evil. And yet they are hilarious and smart and, of course, amazing in bed. I am amazed at this world Kresley Cole has created I also have to say the sex in this book is the best Kresley Cole has created . . . a definite favorite."
--USA Today

Book Description 2012. Paperback. Condition: New. Paperback. From the humblest of beginnings a millennia ago, Lothaire the Enemy of Old rose to power, becoming the most feared and evil vampire in the immortal world. Driven by his past, he will not r.Shipping may be from multiple locations in the US or from the UK, depending on stock availability. 480 pages. 0.335. Seller Inventory # 9780857206930

Book Description 2012. Paperback. Condition: New. Paperback. From the humblest of beginnings a millennia ago, Lothaire the Enemy of Old rose to power, becoming the most feared and evil vampire in the immortal world. Driven by his past, .Shipping may be from our Sydney, NSW warehouse or from our UK or US warehouse, depending on stock availability. 480 pages. 0.335. Seller Inventory # 9780857206930