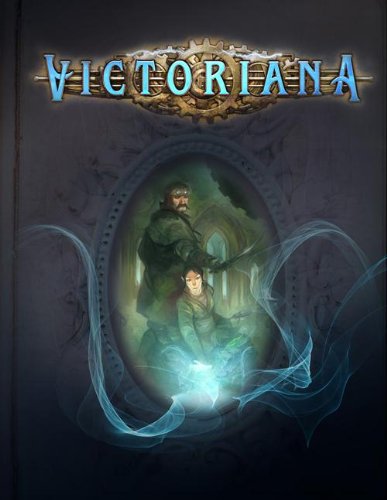 High Fantasy meets Steampunk in the Victorian Age! Join Her Majesty's Army aboard airships and wyverns to defeat the Tsarina's forces in the Crimea. Discover ancient secrets that lie buried in the foothills of the Himalayas and the jungles of central Africa. Keep trade ships safe from the pirates and legendary beasts in the East Indies. Search the gas lit, cobble-stone streets of London for horrific creatures that lurk in the shadows and prey on the poor souls living in the rookeries. Victoriana is a world of high adventure set during an alternate Age of Steam. It is a world much like our own mid-nineteenth century, seamlessly integrated with classic fantasy and steampunk elements. Dwarves and Orcs work in London shipyards while Human sorcerers mingle with Eldren aristocrats. Britain and France unleash marvellous war machines on Russia, while injured soldiers replace lost limbs with aetheric-powered steel. Ghouls, lycanthropes, and vampires haunt London streets and tunnels while oppressed masses agitate for better governments across the globe. The third edition of the Victoriana Core Rulebook includes: " Complete and revised rules for making Victorian adventurers and resolving conflicts. " Rules for creating technological marvels. " Information on the world of Victoriana, including alternate diversions from actual history. " A trove of supporting characters, from scullery maids and barristers to elementals and undead, as well as beasts both mundane and preternatural. " Practical advice for running Victoriana campaigns. " Compatible with Victoriana Second Edition supplements. So don your goggles, grab your sword cane, and pull on your shawl or frock coat! Make certain that your eldritch pepperbox is fully loaded and step into your steam carriage! Victoriana is a world in need of adventurers. Will you answer the call?