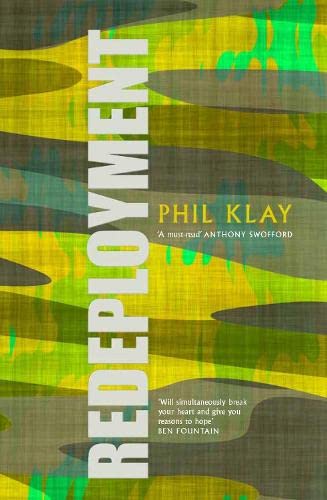 Phil Klay is a Dartmouth grad and a veteran of the US Marine Corps. He served in Iraq during the Surge and subsequently received an MFA from Hunter College, where he studied with Colum McCann and Peter Carey, and worked as Richard Ford’s research assistant. His first published story, “Redeployment”, appeared in Granta’s Summer 2011 issue. That story led to the sale of his collection of the same name, which was published in seven countries. His writing has also appeared in the New York Times, the New York Daily News, Tin House, and in The Best American Nonrequired Reading 2012.

Book Description Condition: Very Good. Ships from the UK. Former library book; may include library markings. Used book that is in excellent condition. May show signs of wear or have minor defects. Seller Inventory # GRP79524010

Shipping: US$ 6.62
From United Kingdom to U.S.A.
Destination, rates & speeds

Book Description Hardcover. Condition: Good. Good condition is defined as: a copy that has been read but remains in clean condition. All of the pages are intact and the cover is intact and the spine may show signs of wear. The book may have minor markings which are not specifically mentioned. Most items will be dispatched the same or the next working day. Seller Inventory # wbb0018422164

Book Description Hardcover. Condition: Used; Good. **SHIPPED FROM UK** We believe you will be completely satisfied with our quick and reliable service. All orders are dispatched as swiftly as possible! Buy with confidence!. Seller Inventory # 1744908

Book Description Hardcover. Condition: Used; Good. **Simply Brit** Shipped with Premium postal service within 24 hours from the UK with impressive delivery time. We have dispatched from our book depository; items of good condition to over ten million satisfied customers worldwide. We are committed to providing you with reliable and efficient service at all times. Seller Inventory # 1586596

Book Description Hardcover. Condition: Very Good. Shipped within 24 hours from our UK warehouse. Clean, undamaged book with no damage to pages and minimal wear to the cover. Spine still tight, in very good condition. Remember if you are not happy, you are covered by our 100% money back guarantee. Seller Inventory # 6545-9780857864239

Book Description Hardcover. Condition: Very Good. Redeployment This book is in very good condition and will be shipped within 24 hours of ordering. The cover may have some limited signs of wear but the pages are clean, intact and the spine remains undamaged. This book has clearly been well maintained and looked after thus far. Money back guarantee if you are not satisfied. See all our books here, order more than 1 book and get discounted shipping. . Seller Inventory # 7719-9780857864239

Book Description Paperback. Condition: Good. The book has been read but remains in clean condition. All pages are intact and the cover is intact. Some minor wear to the spine. Seller Inventory # GOR005585299

Book Description Paperback. Condition: Very Good. WINNER OF THE NATIONAL BOOK AWARD SHORTLISTED FOR THE FRANK O'CONNOR PRIZE 'We shot dogs. Not by accident. We did it on purpose and we called it Operation Scooby. I'm a dog person, so I thought about that a lot' So begins this unprecedented book about the human cost of war by former marine captain and Iraq veteran, Phil Klay. REDEPLOYMENT takes readers to the frontlines of the wars in Iraq, asking us to understand what happened there, and what happened to the soldiers who returned. Interwoven with themes of brutality and faith, guilt and fear, helplessness and survival, the characters in these stories struggle to make meaning out of chaos. Written with a hard-eyed realism andstunning emotional depth, REDEPLOYMENT marks Phil Klay as one of the most talented new voices of his generation. The book has been read, but is in excellent condition. Pages are intact and not marred by notes or highlighting. The spine remains undamaged. Seller Inventory # GOR005611682

Book Description Condition: Good. A+ Customer service! Satisfaction Guaranteed! Book is in Used-Good condition. Pages and cover are clean and intact. Used items may not include supplementary materials such as CDs or access codes. May show signs of minor shelf wear and contain limited notes and highlighting. Seller Inventory # 0857864238-2-4