Items related to Cartels, Competition and Public Procurement: Law and... 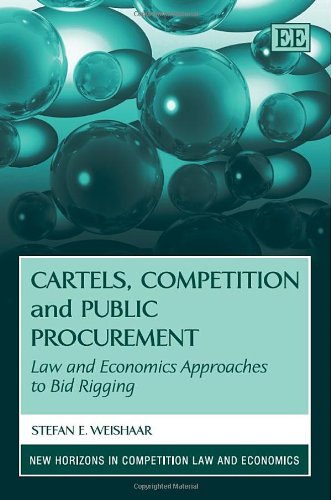 Cartels, Competition and Public Procurement uses a law and economics approach to analyse whether competition and public procurement laws in Europe and Asia deal effectively with bid rigging conspiracies.

Students and researchers who have a keen interest in the relationship between law and economics, competition law and public procurement law will find this topical book invaluable. Practitioners can see how economic theory can be used to identify situations that lend themselves to bid rigging and policymakers will be informed about the shortcomings of existing legislation from a legal and economics perspective and will be inspired by approaches taken in different jurisdictions.

This volume is long overdue. Integrated legal and economic analysis of competition law is crucial given the nature of the sector. However to carry this off successfully, one either needs intensive editorial work to bring different teams together; or one has to rely on the few who master both economic and legal analysis to a tee. Stefan Weishaar's analysis not only looks at a stubborn issue in competition law. He does so in three jurisdictions, in detailed yet clear fashion, with clear insight and ditto conclusions. Over and above its relevance to academic analysis, this book can go straight into competition authorities' decision making, and therefore also in compliance and remediation advice. --Geert Van Calster, University of Leuven, Belgium

Shipping: US$ 9.12
From United Kingdom to U.S.A.
Destination, rates & speeds