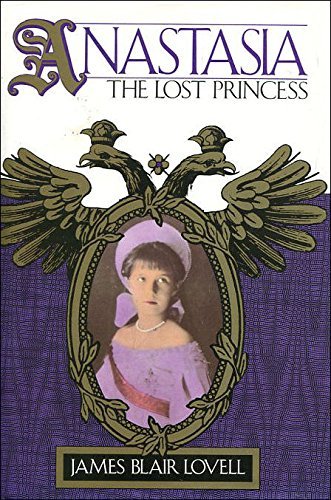 [nastasia] reads like a detective novel, [and] presents an often shocking portrait totally at odds with the Anastasia legend of stage and screen. The fullest account of the mystery to date. --Publishers Weekly

Eminent Romanov historian James Blair Lovell's major work, Anastasia: The Lost Princess, was first published in 1991. When he died in 1993, he left behind a vast and important archive of Romanov documents and artifacts.

The story--apparently definitive--of Anastasia, the fourth daughter of Czar Nicholas II of Russia. Free-lance journalist Lovell (The New York Times, The Washington Post) writes of Anastasia's escape at age 16 from the 1917 assassination of her family, of her desperate but futile attempts to establish her identity, of her struggle to overcome the fictional representations of her in films (one starring Ingrid Bergman won an Oscar), songs, plays, and novels--and of his own experience writing this book, working with the aged recluse (who believed him to be a reincarnation of her father), the ``Czarina of Charlottesville, Va.'' that she had become. Curiously, Anastasia's true life is more of a fairy tale than the fictions: a foundling of questionable origins; rescued from a suicide attempt in a Berlin canal; periodically committed to asylums for mental aberrations and tantrums; tested on the basis of a scar, a disfigured toe, an anecdote or riddle; and, finally, rescued by a Virginian gentleman, John Manahan, who married her to keep her from being deported and ended up sharing her bizarre world. Unfortunately, her disagreeable personality made her more the witch than the princess--demanding, argumentative, deceitful, imperious, suspicious, disheveled (except when one N.Y.C. hostess gave her a charge account at B. Altman); surrounded by legions of cats, dogs, and mementos of all sorts; and consumed by hatred for the British royal family, who, she claimed, refused to recognize her because they had confiscated her dowry. She died at age 83, in 1984. Lovell is a splendid narrator, balanced, sympathetic, with a rare eye for the ironic (Anna reveals her identity to him while sitting in the lobby of a movie house where King Kong is playing). The major irony: how a Russian female without beauty, charm, money, talent, or training managed to live for most of the 20th century without ever having to work, existing on the faith, however imperfect, of those who needed to believe in her. A great, absorbing read by a gifted storyteller. (Two eight-page photo inserts--not seen.) -- Copyright ©1991, Kirkus Associates, LP. All rights reserved.