Items related to Drawing the Line: Art and Cultural Identity in Contemporary... 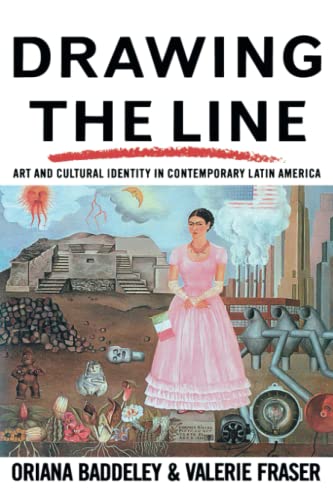 Recent international interest in the painters of the Mexican mural movement, such as Rivera and Orozco, has brought Latin American art to a wider audience than ever before but has often failed to confront its continuing marginalization within art criticism.

Drawing the Line is an exploration of the areas occupied by Latin American art and culture between the ongoing traditions of its indigenous inhabitants, its colonial heritage and its contemporary relationship to the cultural politics of North America and Europe. It looks at the way cultural identity has been constructed by artists from the 1940s to the present day and challenges the way art criticism has hitherto dealt with Latin American art.

Established stereotypes of Latin American culture are discussed in terms of their relevance to contemporary artists. The book looks at the frequent subversion of dominant images and conventions of European art—such as the political significance of landscape painted as an attempt to define a specifically Latin American reality, or the constant reworking of familiar icons of European art—and explores the importance of Latin America to the European surrealist movement. The authors examine the significance of popular art—such as the Chilean arpilleras which commemorate the “disappeared” of Pinochet’s regime—and relate it to the traditional “high art/low art” dichotomy.

Including new perspectives on race and gender, Drawing the Line is the most comprehensive account of contemporary Latin American art ever to appear in English.

Valerie Fraser is a Reader in the Department of Art History and Theory at the University of Essex. Her books include Building the New World, The Architecture of Conquest, and, with Oriana Baddeley, Drawing the Line.

Among the few (and rarely up-to-date) books that seriously address the arts in Latin America, this is especially interesting because of its interdisciplinary approach. The authors examine some key issues affecting artistic production, among them geography and changing borders, politics, the colonial past, race, and sexism. This is not an introductory text for general readers, instead offering discussions of artists and their cultural climate that are likely to spark new ideas for further research. This book brings modern Latin American art to a more richly developed point than Gilbert Chase's basic monograph Contemporary Art in Latin America (1969). Most appropriate for academic and specialized libraries. (Illustrations not seen.)-- Paula A. Baxter, NYPL
Copyright 1989 Reed Business Information, Inc.