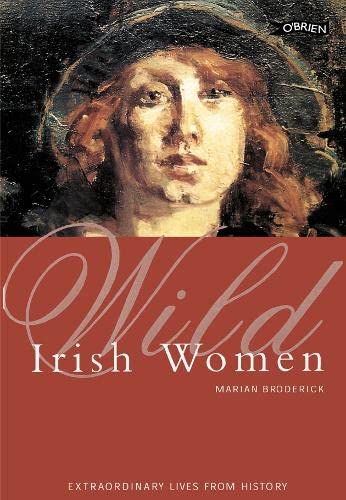 Wild Irish Women brings together a fascinating collection of unusual, unorthodox and unforgettable women. In every era of Ireland's history there have been those who have ignored society's conventions. In times when women were expected to marry and have children, they travelled the world and sought out adventures, in times when women were expected to be seen and not heard, they spoke out in loud voices against oppression in times when women were expected to have no interest in politics, literature, art or the world outside the home, they used every creative means available to give expression to their thoughts, ideas and beliefs.
Irish people today have a long roll-call of female ancestors to inspire, amuse and outrage them. In a series of lively portraits, Marian Broderick tells the life stories of seventy-five-women well-known and unfamiliar - from all walks of life. Included are writers, artists, male impersonators, patriots, pirates, healers, killers, mistresses, warriors, record-breakers, journalists, film stars and saints.

Copublished with the O'Brien Press, Dublin

Wisconsin edition for sale only in the United States, Canada, and the Philippines

Marian Broderick is a freelance editor and the author of The Lost Fairy.