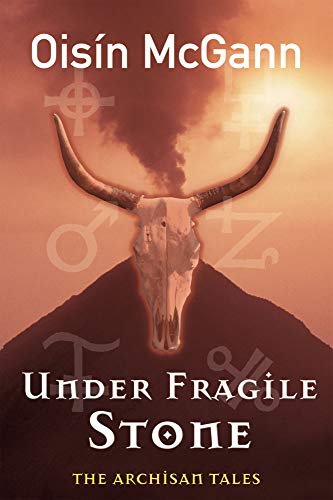 Volume II of The Archisan Tales. Taya and Lorkrin's shape-changing Myunan tribe faces an invasion by Noran, which is intent on mining the valuable iron ore from their sacred mountain, Absaleth. But the mountain is haunted and fights back with supernatural powers. Then a mine tunnel collapses and the miners are trapped. With them are Taya and Lorkrin's parents, Nayalla and Mirkrin, who had been searching for their unruly children. Taya and Lorkrin are terrified for their parents. But help arrives in the form of their Uncle Emos. He and his friend Draegar know there is one chance for the trapped people -- another entrance to the caves far back in the mountain range. A rescue party sets out as the mountain starts to collapse in on itself.

Born in Dublin in 1973, Oisin McGann spent his childhood there and in Drogheda, County Louth. He studied art at Ballyfermot Senior College and Dun Laoghaire School of Art and Design, and went on to work in illustration, design and film animation. He moved to London in 1998, where he eventually found work as an art director and copy writer for an advertising agency. After three and a half years of advertising, he began to fear for his immortal soul. He returned to Ireland in the summer of 2002 much as he had left ... with no job, no home and some meagre savings. He now lives in Meath and works as an author, freelance illustrator and artist. You can check out Oisin's own website at oisinmcgann.com.

'From the very first pages, I was held firmly under its spell; I read it with huge enjoyment, and after reaching the final chapter I was even tempted to begin it all over again. For those that appreciate the fantastic, this book has it all: nail-biting tension stirred in with plenty of humour.' -- Teresa Doran - Books Ireland * Books Ireland * 'A funny, scary and unputdownable book' -- Publishing News 'there's a collection of wondrous creatures that London Zoo would cast an envious glance at, a set of rogues who veer towards the pantomime and two engaging central characters on a voyage of discovery that pre-teen and early teen readers will empathise with. It all leaves you marvelling at the invention of Oisin McGann.' -- Achuka.co.uk 'very strong on invention of character and fast-moving, frightening adventure' -- Books Ireland * Books Ireland *

1. Under Fragile Stone: Part Two of the Archisan Tales

Shipping: US$ 23.65
From United Kingdom to U.S.A.
Destination, rates & speeds