Items related to Music in educational thought and practice: A survey...

Rainbow, Bernarr Music in educational thought and practice: A survey from 800 BC (Boethius Classic Texts in Music Education)

Music in educational thought and practice: A survey from 800 BC (Boethius Classic Texts in Music Education) 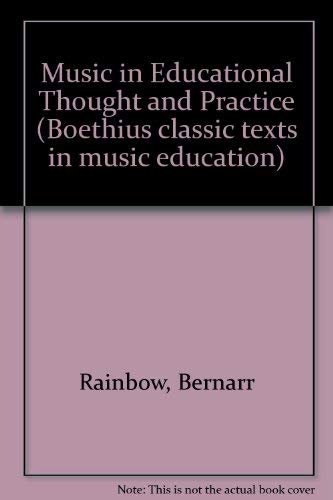 This long-awaited book, some thirty years in the making, traces the development of music as an educational force from the dawn of European civilisation in ancient Crete, Sparta and Athens, to our own day. Planned as a source book,the material gathered overflowed the bounds set for it. The present book offers an extended commentary upon the bulk of the material and includes clearly attributed sources to guide the serious student's further investigations.Until the concept of Christendom was shattered at the Reformation, national boundaries in Europe counted for little where educational endeavour was concerned. Consequently, although the book's eventual concern is with the English scene - and essentially with music's place in general education - substantial reference is made to trends and events in other lands. But exhaustive treatment of universal activity is not within the scope of a single volume.Hithertothe development and status of musical education in England has received small attention from the social historian. With the appearance of this book that deficiency is removed. We now have a representative text to set alongside Schünemann's Geschichte der deutschen Schulmusik, Chevais's 'enseignement musical à l'école, and Birge's History of Public School Music in the United States.

1. Music in educational thought and practice: A survey from 800 BC (Boethius Classic Texts in Music Education)