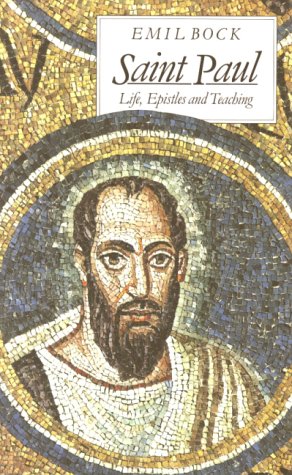 Describing the environment into which Saul was born, his education, his conversion before Damascus and his subsequent journeys, Bock's study gives a spiritual dimension to Paul's background, providing a deeper understanding of this great Christian figure and his teaching. Above all he shows that Paul was the apostle who carried Christianity beyond the Jewish communities to humanity at large. As a zealous Jew, Paul was convinced he was serving the coming Messiah in his persecution of the followers of Jesus. When the light suddenly came to him before Damascus his inmost being was opened. Here Paul shows that the time of the Law of Moses had run its course and conscience as 'inner jurisdiction' was now to replace the rules and laws imposed from without.

Emil Bock was born in Wuppertal, Germany in 1895, and studied German and theology, receiving his licentiate in 1921. From 1938 until his death in 1959, he was the head of The Christian Community movement.

Book Description Floris Books, 1993. Condition: Good. A+ Customer service! Satisfaction Guaranteed! Book is in Used-Good condition. Pages and cover are clean and intact. Used items may not include supplementary materials such as CDs or access codes. May show signs of minor shelf wear and contain limited notes and highlighting. Seller Inventory # 0863151302-2-4

Book Description Floris Books 1993-06-01, 1993. Hardcover. Condition: Very Good. Item is in very good condition. If supplemental codes/CDs for textbooks are required please contact us prior to purchasing as they may be missing. Seller Inventory # DS-0863151302-2