Items related to Chomsky for Beginners (WRITERS AND READERS BEGINNERS... 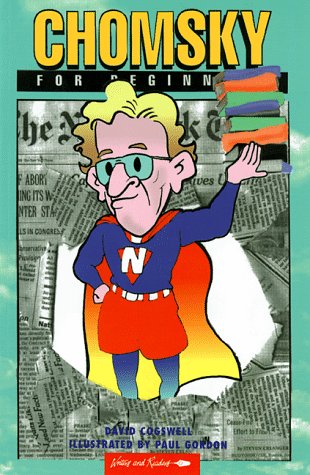 Noam Chomsky, "arguably the most important intellectual alive" (The New York Times), first became famous through his work in linguistics. Chomsky's second career, as a political/analyst/critic/activist is harder to categorize. Chomsky for Beginners presents a concise yet comprehensive introduction to this political gadfly and "media critic," whose ideas are in deadly opposition to the kow-towing mass media.

David Cogswell is a writer based in Hoboken, N.J. He has written thousands of articles on business, travel, politics, and the arts for various print and online publications, including Democratic Underground, Bushwatch, Prison Planet, Indymedia.org, Fortune.com, Travel Weekly, the Hudson Current, and the Jersey Journal. He has contributed pieces to a number of political books, including Fortunate Son, The Making of an American President, by J.H. Hatfield; Ambushed: The Hidden History of the Bush Family by Toby Rogers; and America’s Autopsy Report, by John Kaminski. He’s the publisher of the political and media commentary website HeadBlast (www.davidcogswell.com), which was banned in China and named as a notable antiwar website by The Guardian.