Items related to The Divine Ryans (Between the Covers Collection)

Wayne Johnston The Divine Ryans (Between the Covers Collection)

The Divine Ryans (Between the Covers Collection) 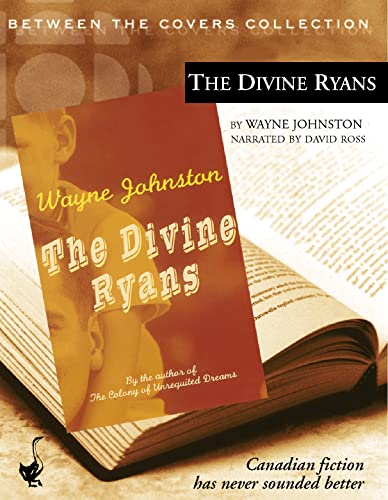 A poignant tale by the author of The Colony of Unrequited Dreams. Draper Doyle Ryan, a nine-year-old Habs fan, struggles with the mysterious death of his father, his budding adolescence, and the strange demands of his eccentric family.

Nine-year-old Draper Doyle Ryan, sole male heir to the once-venerable Ryan name, seems an unlikely family savior. Harried by his own frantic hormones, flustered by his many insufficiencies, and beset by a cadre of oppressive relatives, about the only defense he has is an endlessly inventive imagination. It's a fine line between coming-of-age sentimentality and gratuitous high jinks Wayne Johnston walks in his pleasing novel The Divine Ryans; the result--a snapshot of that twilight between childhood befuddlement and mature disillusionment--is unexpected and deft.

Draper Doyle's life in Newfoundland, circa mid-1960s, is as constrained as it is colorful. Cooped up in one house with various family oddballs, he views the world from the bottom rungs of the ladder. Perpetually harangued by the frigid and imperious Aunt Phil (whose powers of humiliation reach their apex when she displays a pair of his urine-stained underwear on the kitchen bulletin board), and browbeaten by one smarmy, perverse uncle, Father Seymour, the boy retreats into consoling fantasy, fretful ruminations, and the friendship of his only ally, irreverent Uncle Reginald. When Phil employs a weary argument to shame Draper Doyle into finishing a meal, Reginald wonders aloud if bulletins were "being sent to the poor people of South America by the hour, keeping them up to date about what percentage of their food children of the Western world were eating." Draper Doyle is also haunted--literally--by the ghost of his father, a mystery whose painful resolution almost miraculously offers deliverance to both him and his mother.

What is most gratifying about The Divine Ryans is that it moves so effortlessly from the comic to the bittersweet, from the madcap to the revelatory. Johnston's Twainesque aptitude transmutes drollness and hyperbole into something larger: out of his young hero's absurd comic tangles, we sense a subject slowly grasping not only the shortcomings of those who love him, but also their many travails. The book's divine. --Ben Guterson

For nine-year-old Draper Doyle Ryan, life in St. John's is equal parts humour and heartbreak. He struggles with the mysterious death of his father, his budding adolescence, and the demands of his eccentric family.

The Ryans are devout Catholics; Draper is a die-hard Habs fan. Hockey is his passion, Saturday night his church service, Foster Hewitt his priest. When the Habs play the Leafs, his whole family gathers, turning what was never merely a game into an epic battle between the "true church" and the Protestants.

1. The Divine Ryans (Between the Covers Collection)