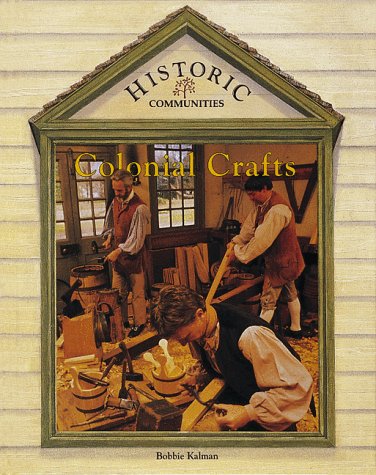 Bobbie Kalman's acclaimed Historic Communities Series provides a close-up view of how people lived more than two hundred years ago. Colorful photos, many taken by Bobbie Kalman herself at restored historic villages across the country, help support the fascinating information. Children will have fun learning about: -- early homes and the settler community-- what people wore and the crafts they made-- how settlers made their living-- how they spent their leisure time-- the values, customs, and traditions of the early settlersColonial Crafts introduces young readers to the craftspeople who created useful works of art by hand, many of which have lasted more than two hundred years. Children will find out how the artisans learned their trades through many years of apprenticeship, as their masters did before them.Visit the workshops of: -- the wheelwright-- the cooper-- the founder-- the shoemaker-- the milliner-- the gunsmith

From the Back Cover:
In colonial times there were no factories. If some needed a barrel or a chair, that object had to be made by hand. Crafts people made furniture, utensils for the home, and tools for farmers. Each of these essential artisans was skilled in one particular craft. The wheelwright, for example, made wheels.
Excerpt. © Reprinted by permission. All rights reserved.:
Taken from Chapter 13: The Wigmaker Wigs were worn by those who could afford their expensive prices. Wealthy children as young as seven years old were fitted for wigs. In the early day of the colonies, large wigs were considered fashionable. The most expensive wigs were made from human hair. It was not uncommon for people to have their hair cut off to be woven into wigs. Cheaper wigs were made form horsehair or silk. To keep them clean and neat, wigs needed to be powered with fine sand or flour dust and then shaken and combed. The powder absorbed the oils that built up from the person's own hair underneath. People did not wash their hair very often in those days!