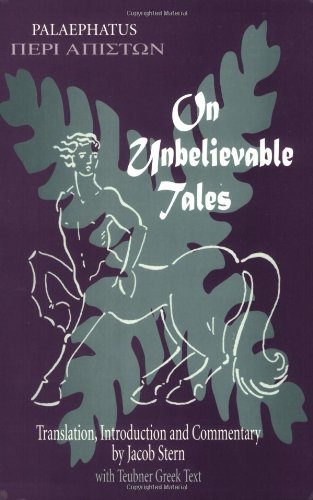 Palaephatus, a contemporary of Aristotle, sought to reinforce belief in the historicity of ancient heroes by tracing the evolution of 'actual' events into marvelously embellished myths. On Unbelievable Tales represents one of the earliest efforts to rationalize oft-told tales of Greek mythology.

This dual-language edition is the first published translation of the work of Palaephatus and presents a treasury of twists on familiar ancient tales. It includes:
- English translations for 52 tales
- Commentary and notes on the ancient sources for each tale
- An introduction on Palaephatus with an in-depth examination of the historical context of his work
- Reprint of the Greek text and notes from the 1902 Teubner edition. This book makes these significant - often amusing - tales available for the first time. It will be accessible and appealing to a wide range of readers from the generalist to the scholar.

"Nothing is sure about Palaephatus: who he was, when he wrote, what portion of his work survives today and in what condition - to each of these questions only probable answers can be given, and the opinions of scholars will not be in full accord. Even the name "Palaephatus" has been called into question. As a poetical adjective the word palaiphatos - found in Homer, Pindar and the Greek tragedians - means "spoken long ago" or "of ancient fame," and a number of modern scholars suspect that as a proper name "Palaephatus" is in fact a pseudonym." - From the Author's Introduction.