Items related to Between Meals: An Appetite for Paris

Liebling, A. J. Between Meals: An Appetite for Paris 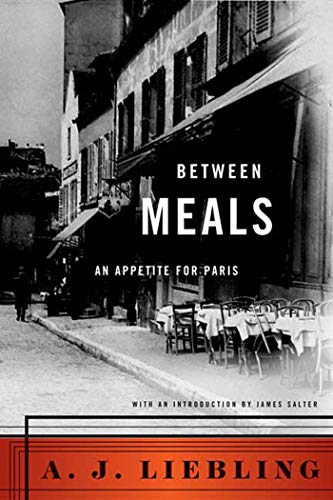 New Yorker staff writer A.J. Liebling recalls his Parisian apprenticeship in the fine art of eating in this charming memoir, Between Meals: An Appetite for Paris.

“There would come a time when, if I had compared my life to a cake, the sojourns in Paris would have presented the chocolate filling. The intervening layers were plain sponge.”

In his nostalgic review of his Rabelaisian initiation into life’s finer pleasures, Liebling celebrates the richness and variety of French food, fondly recalling great meals and memorable wines. He writes with awe and a touch of envy of his friend and mentor Yves Mirande, “one of the last great gastronomes of France,” who would dispatch a lunch of “raw Bayonne ham and fresh figs, a hot sausage in crust, spindles of filleted pike in a rich rose sauce Nantua, a leg of lamb larded with anchovies, artichokes on a pedestal of foie gras, and four or five kinds of cheese, with a good bottle of Bordeaux and one of Champagne”―all before beginning to contemplate dinner.

In A.J. Liebling, a great writer and a great eater became one, for he offers readers a rare and bountiful feast in this delectable book.

With an introduction by James Salter, PEN/Faulkner Award-winning author of A Sport and a Pastime

A man of Rabelaisian appetite, with the exquisite palate of the true gastronome and the literary flair to match, A.J. Liebling (1904-1963) was a formidable eater and a remarkable man, and his nostalgic recitation of his years and meals in Paris is a pleasure to read, dream on, and drool about.

Liebling treasured a good appetite as a prerequisite for writing about food, as his accounts of substantial meals (two portions of cassoulet, one steak topped with beef marrow, and a dozen or so oysters, for example) attest. For the poised, precise, literary, and humorous flavor of his writing, you need only crack open the book--any page will do. Liebling recounts how to dine superbly without being lead astray by too much money, and he digresses magnificently on the evils of abstemiousness ("No sane man can afford to dispense with debilitating pleasures; no ascetic can be considered reliably sane"). In this age of diets and pragmatic health care, it's refreshing to read such an inspired and inspiring ode to pleasure. As a means of savoring a love affair with Paris, sparking an interest in a trip to France, restructuring your priorities for the trip you've already planned, or gearing up on the flight over for the gastronomic debauches to come, Liebling is unsurpassed. --Stephanie Gold

A.J. Liebling joined the staff of The New Yorker in 1935, where his "Wayward Press" columns became a model of fine journalistic writing. Other Liebling titles available from North Point Press are Between Meals, The Honest Rainmaker, and The Neutral Corner: Uncollected Boxing Essays.

Between Meals: An Appetite for Paris Paperback