Items related to My Kitchen Wars 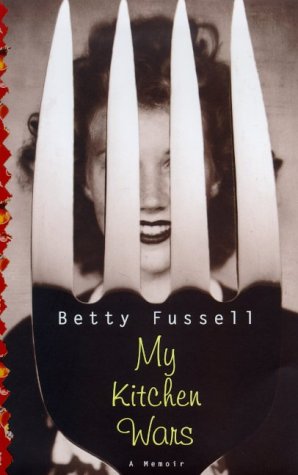 My Kitchen Wars is a war story-but the warrior is a woman, the battleground is the kitchen, and the weapons are the batterie de cuisine with which Betty Fussell evokes her era's domestic battles. As much about hunger-emotional, sexual, intellectual-as it is about food, this fierce and funny memoir takes no prisoners.

She may be a cookbook author, but Betty Fussell's extra-tart autobiography is no ordinary gastronomic memoir. For starters, her attitude toward cooking ("the one activity, besides tennis, in which housewives were encouraged to excel") is decidedly ambivalent. A chapter entitled "Attack by Whisk and Cuisinart" paints a devastating portrait of entertaining as a competitive sport, in which women who spend weeks planning and executing elaborate dinner parties must "pretend there'd been no labor, no expense, no fatigue, no sweat ... the aim was to look like a hot tomato while remaining cucumber-cool." For another thing, anyone with Fussell's gift for apt metaphor should enjoy chapters like "To Arms with Squeezer and Slicer," or "Invasion of the Waring Blenders," whose titles wittily encapsulate their content and would be wasted on mere recipes or recollections of Chefs I Have Known. Instead, she limns the experience of a generation of women who flung themselves into domesticity after World War II with mixed results, which in the author's case included an ultimately failed marriage to cultural historian Paul Fussell (who is not treated gently here). Smart, funny, even appetizing at times, her book takes one woman's story as a case study of the role food plays in our lives and in our culture. --Wendy Smith

Betty Fussell is the author of nine books. A contributor to publications including The New York Times and The New Yorker, she has lectured widely on food history. She lives in New York City.