Items related to Walking Toward the Sunset: The Melungenons of Appalachia...

Winkler, Wayne Walking Toward the Sunset: The Melungenons of Appalachia (Melungeons (Series).)

Walking Toward the Sunset: The Melungenons of Appalachia (Melungeons (Series).) 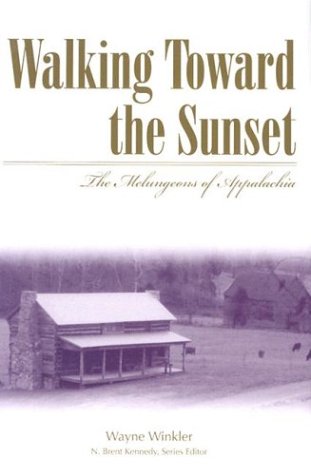 Walking toward the Sunset is a historical examination of the Melungeons, a mixed-race group predominantly in southern Appalachia. Author Wayne Winkler reviews theories about the Melungeons, compares the Melungeons with other mixed-race groups, and incorporates the latest scientific research to present a comprehensive portrait.In his telling portrait, Winkler examines the history of the Melungeons and the ongoing controversy surrounding their mysterious origins. Employing historical records, news reports over almost two centuries, and personal interviews, Winkler tells the fascinating story of a people who did not fit the rigid racial categories of American society. Along the way, Winkler recounts the legal and social restrictions suffered by Melungeons and other mixed-race groups, particularly Virginia's 1924 Racial Integrity Act, and he reviews the negative effects of nineteenth- and twentieth-century magazine and journal articles on these reclusive people. Walking toward the Sunset documents the changes in public and private attitudes toward the Melungeons, the current debates over "Melungeon" identity, and the recent genetic studies that have attempted to shed light on the subject. But most importantly, Winkler relates the lives of families who were outsiders in their own communities, who were shunned and shamed, but who created a better life for their children, descendants who are now reclaiming the heritage that was hidden from them for generations.

1. Walking Toward the Sunset: The Melungeons of Appalachia (Melungeons: History, Culture, Ethnicity, & Literature)