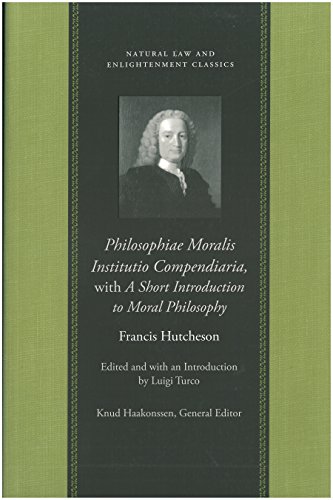 This Liberty Fund publication of Philosophiae Moralis Institutio Compendiaria is a parallel edition of the English and Latin versions of a book designed by Hutcheson for use in the classroom. General Editor Knud Haakonssen remarks that Hutcheson’s Institutio was written as a textbook for university students and it therefore covers a curriculum which has an institutional background in his own university, Glasgow. This was a curriculum crucially influenced by Hutcheson’s predecessor Gershom Carmichael, and at its center was modern natural jurisprudence as systematized by Grotius, Pufendorf, and others. . . . The Institutio is the first major [published] attempt by Hutcheson to deal with natural law on his own terms. . . . It therefore encapsulates the axis of natural law and Scottish Enlightenment ideas, which so many other thinkers, including Adam Smith, worked with in their different ways. It is of great significance that this work issued from the class in which Smith sat as a student.”

Editor Luigi Turco comments that the aim of the text was twofold: on one hand, to put forward an optimistic view of God, human nature, and the harmony of the universe; on the other hand, to provide students with the knowledge of natural and civil law required by the university curriculum. Hutcheson starts from Pufendorf’s De officio hominis et civis (itself an abridgment of his De jure naturae et gentium) the text that was most widely read within Protestant universities but modifies its moral foundations.”

Francis Hutcheson was a crucial link between the continental European natural law tradition and the emerging Scottish Enlightenment. Hence, he is a pivotal figure in the Natural Law and Enlightenment Classics series. A contemporary of Lord Kames and George Turnbull, an acquaintance of David Hume, and the teacher of Adam Smith, Hutcheson was arguably the leading figure in making Scotland distinctive within the general European Enlightenment.

Luigi Turco is Professor of Philosophy at the University of Bologna.

Mr. Peach is Professor of Philosophy at Duke University.

The second volume under review contains Hutcheson's Philosophiae Moralis Institutio Compendiaria (Glasgow, 1742; 2nd edn., 1745) in conjunction with the English translation of it, published in 1747 with new texts and other additions. As Hutcheson points out at the very beginning, it is designed for students at the universities who had already finished their courses on logic and metaphysics. The "chief points to be enquired into in Moral Philosophy must be," according to Hutcheson, "what course of life is according to the intention of nature? Wherein consists happiness? And what is virtue?" (p. 23). The book itself contains the elements of this branch of philosophy and is divided into ethics ("teaching the nature of virtue and regulating the internal dispositions") and the law of nature, covering civil law ("or the laws and rights obtaining in natural liberty"), oeconomics ("or the laws and rights of several members of a family") and politics ("shewing the various plans of civil government, and the rights of states with respect to each other").

Shipping: US$ 3.92
From United Kingdom to U.S.A.
Destination, rates & speeds

Shipping: US$ 6.55
From United Kingdom to U.S.A.
Destination, rates & speeds

Shipping: US$ 9.10
From United Kingdom to U.S.A.
Destination, rates & speeds

Book Description Condition: New. Not Signed; In this new, dual-language edition, Hutcheson's Latin Philosophiae Moralis Institutio Compendiaria is presented on facing pages with its English translation, A Short Introduction to Moral Philosophy, together with all the relevant alterations of the 1745 edition relating to the 1742 edition of the I. book. Seller Inventory # ria9780865974531_new

Shipping: US$ 5.08
From United Kingdom to U.S.A.
Destination, rates & speeds