Items related to Charles S. Peirce: From Pragmatism to Pragmaticism 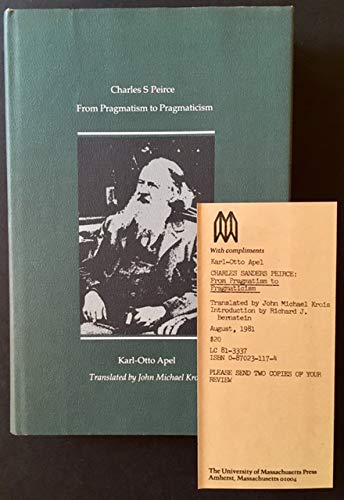 Charles Sanders Peirce is widely recognized as the founder of American pragmatism. Apel's systematic, sweeping, and innovative study quickly turned into a classic of Peirce scholarship when first published and became a major factor during the late sixties and early seventies in the discovery of pragmatism by Continental philosophy. The work discusses the historical importance of pragmatism as one of the major modern responses to the 'disintegration of the Hegelian synthesis'. As a mediation between theory and praxis, Apel presents pragmatism as the major rival to both existentialism and Marxism, the two other responses to the Hegelian aftermath. In the same context, Apel demonstrates the importance of Peirce's conceptual breakthroughs, in the theory of signs (semiotics) and the theory of rationality, for the challenges and possibilities of a critical theory of society. The contemporary developments of the Frankfurt School, in its third generation now, cannot be understood without Apel's appropriations of Peirce for a grounding of a critical theory of society as formulated in this systematic reconstruction of modern philosophy. This work is also crucial for an understanding of Apel's own philosophical project of a transcendental pragmatics, or semiotics. With the revival of Peirce studies, and the rediscovery of the pragmatist tradition in American philosophical thinking, this study articulates a very contemporary and relevant interpretation that may challenge and even go against the grain of many so-called Neopragmatists. This book will also be of interest to those scholars interested in the development of post World War-II German thought, and the influence of North American thinking on European thought in general.