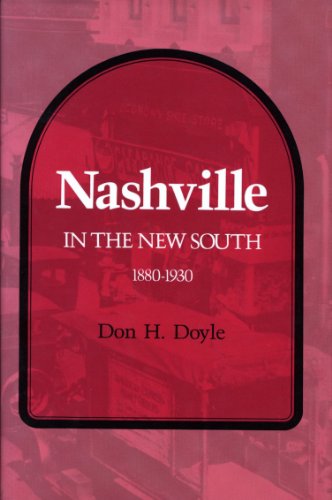 Nashville in the New South, 1880-1930. Don H. Doyle. DESCRIPTION: A general history of the city with emphasis on the social history. After Reconstruction, Nashville spearheaded the South's transformation and became a battleground for forces of continuity and change. This work chronicles a half century of turbulent growth, from the buoyant celebration of the city's centennial to the onset of the Great Depression. In 1880 Nashville looked ahead to a future of wealth and promise. During the next few decades as railroads expanded, the city's economy prospered, Nashville grew more than three and a half time in size, and a new class of merchants, industrialists, and financiers emerged. The city became a center for higher education in the South. The depression of the 1890s slowed growth, and business leadership became more fragmented and conservative. Lacking a competitive railroad service and a strong industrial base, Nashville lagged behind Memphis, Birmingham, and Atlanta after the 1890s. After the turn of the century, however, a coherent central business district emerged, along with new skyscrapers and streetcars penetrating a suburban frontier. Although an era of progressive reform brought improvements in public education, health, and housing, a ring of squalid, disease-ridden slums surrounded its downtown. By the 1920s aggressive banks, brokerage houses, and insurance companies had created the "Wall Street of the South." Institutions of higher learning supplied cultural refinement that countered the materialism of city boosters. With the collapse of 1929, the aspirations of the New South were, for the moment, defeated. ABOUT THE AUTHOR: Don H. Doyle is the McCausland Professor of History at the University of South Carolina. He is the author of New Men, New Cities, New South: Nashville, Charleston, Mobile, 1860-1910, and other works on Southern history. PUBLISHING DETAILS: University of Tennessee Press, © 1985. Hardcover. 289 + xviii pages. 6.4" x 9.5".