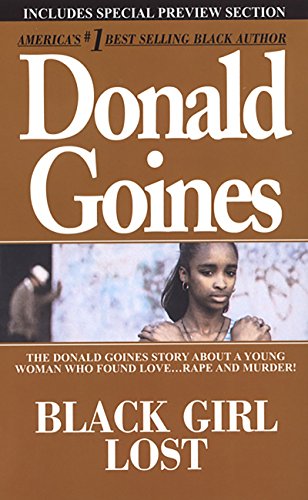 "The voice of the ghetto itself." —The Village Voice
Shocking, thrilling, and absolutely unforgettable—Donald Goines returns with another classic urban tale about one woman who is living life without any rules. . .

Almost since the day she was born, Sandra had to fend for herself on the streets of Detroit. Crime and pain were her closest companions. Then someone she had no business believing in waltzed into her life—a man willing to watch her back and show her how to make easy money. But when Chink gets caught, Sandra commits the ultimate act of love to keep her man out of jail. For a black girl lost, murder was always in the cards. . .

Donald Goines was born in Detroit, Michigan. He joined the U.S. Air Force instead of going into his family’s dry cleaning business. Following his service, he entered into a life of drug addiction and crime. He received seven prison sentences, serving a total of over six years. While he was in prison, Goines wrote his first two novels, Dopefiend: The Story of a Black Junkie and Whoreson: The Story of a Ghetto Pimp. Goines was shot to death in 1974.

Book Description Mass Market Paperback. Condition: New. Mass Market Paperback. In this shocking novel of a young girl alone on the streets, Goines delves into yet another facet of the ghetto experience - the dark, despair-ridden world of a black girl's so.Shipping may be from multiple locations in the US or from the UK, depending on stock availability. 207 pages. 0.113. Seller Inventory # 9780870679858