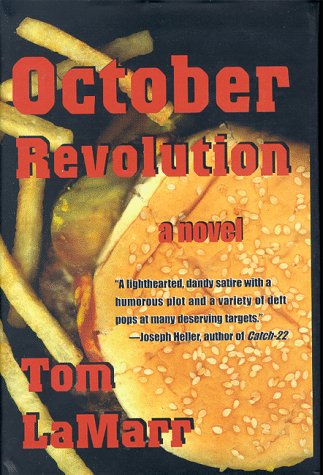 Sixties Radical Author Rod Huxley has spent the last two decades holed up in a Denver apartment with only his cats for company, hiding from the fallout of his once-popular Cookbook for Revolution, written at the urging of former girlfriend and admirer Sara Caine. With the success of Cookbook came a certain, if fleeting, celebrity status and - via generous financial support from the unbalanced heir to a South American rubber fortune - the unpalatable realization that he was a phony.
But his self-imposed exile is not to last. When he wrote Cookbook, little did he imagine it would precipitate a hostage crisis of national interest twenty years later. A terrorist is detaining a group of tourists at a Burger King in downtown Washington, D.C., demanding Huxley's presence in exchange for their release. Soon the FBI, led by the ineffectual Agent Fenwick, is knocking at Huxley's door, ready to escort him to the nation's capital.
Unable to tolerate his talkative companion, Huxley gives Fenwick the slip and makes his way to Washington alone, determined to face the mysterious terrorist, whose identity he can only guess at. Who is this hostage taker, and what does he - or she - want? As Huxley confronts the answers, he must also confront himself, his past - and his future.

Although he would like to say he's a native of Colorado--where he plans to complete the rest of his novels--Tom LaMarr grew up in eastern Iowa, and has lived near sea level in Florida and the District of Columbia. OCTOBER REVOLUTION is his first novel.

With a humorous touch that fumbles its action scenes, LaMarr's debut will evoke nostalgia in baby boomers no matter what their allegiances during the 1960s political wars. Roderick Huxley, infamous author of a revolutionary "cookbook" (actually the work of his cynical capitalist editor), is recalled from his disillusioned, hermit-like existence to meet with a hostage-holding terrorist in a D.C. Burger King who insists on seeing only him. As FBI agent Fenwick and his Keystone Kops colleagues attempt to shepherd Huxley to Washington, the old radical frequently wanders off on his own. During his rambles, well-executed flashbacks tell of his youthful folly, his overzealous contemporaries, his romances and the narrow tyranny of his family and his school (the Iowa Writers' Workshop). Less effective are action scenes, especially the eventual flight from the Burger King, as attempts at humor shatter both tension and credibility. Indeed, once Huxley arrives at the hostage site, the book loses steam. The ironic tone with which LaMarr portrays the past also limits the book's engagement with the present. And, after all the jokes, the peregrinations and the confrontations with the past, the protagonist's renewed interest in the world at the novel's conclusion just doesn't ring true.
Copyright 1998 Reed Business Information, Inc.