Items related to The Pyramid of Senwosret I (THE SOUTH CEMETERIES OF...

Arnold, Dieter The Pyramid of Senwosret I (THE SOUTH CEMETERIES OF LISHT/THE METROPOLITAN MUSEUM OF ART EGYPTIAN EXPEDITION, VOL 1)

The Pyramid of Senwosret I (THE SOUTH CEMETERIES OF LISHT/THE METROPOLITAN MUSEUM OF ART EGYPTIAN EXPEDITION, VOL 1) 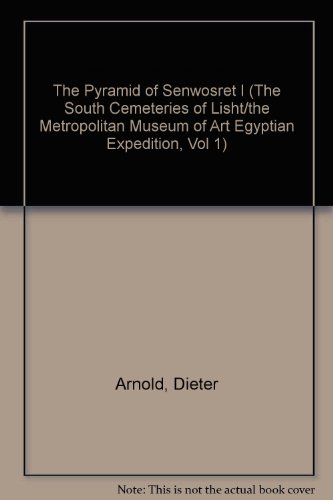 Compared to the great collections of Egyptian art in Europe, that of the Metropolitan Museum is young. But the relatively late date at which the collection was started was also a major asset: the greater part of the Egyptian collection came from controlled excavations which the Museum undertook between 1906 and 1936 at Thebes, Lisht, the Wadi Natrun, the Kharga Oasis, and Hierakonpolis. Thus the collection is rich not only in art objects representative of ancient Egyptian culture, but in pieces which are part of a scientific context. They form groups in which each individual piece contributes to the understanding of the others, for the drawings, notes, plans and photographs in the excavation records provide a wealth of information that places the objects in a specific locality, architectural setting, and chronological horizon.

The Department feels an obligation to make these records available to scholars of the ancient world and to the interested public, following the precedent set by early members of this Department who began the work under the guidance of Curator Albert M. Lythgoe. Excavation then as now meant not only the retrieval of objects and associated information, but the analysis and dissemination of knowledge through publication. Only when the task of publishing all important archaeological information gained during an excavation is accomplished can we feel that the project is completed.

Many problems arise in attempting to publish archival records in the absence of guidance from the original excavators. The reader who is not familiar with excavation records may think that it is a simple task to check the records for a particular piece in order to obtain the information necessary to evaluate its date and meaning. In point of fact, only in very few instances can one obtain information about an object without thoroughly working through all available records of the site from which it came. Usually one note or plan cannot be understood without another; that one leads to another, and in the end one is forced to evaluate a whole site. There is no short cut to understanding context; everything is connected.

Another aspect of reworking old excavations is the need to return to the field areas of a site. In many cases it is preferable to re-excavate, at least in part. The most obvious reason is to permit the author of the final publication to become thoroughly familiar with local conditions at the site. But another reason is even more important. The methods of excavation in the first third of this century have been surpassed by the methods of today, and present-day archaeology not only produces new types of records but also asks new questions.

In 1984 these two considerations induced the Department of Egyptian Art to reopen its work at the site which it had chosen as its first focus, the ancient site of Lisht near modern-day Cairo. The Egyptian Antiquities Organization kindly granted permission to do this, and three seasons have now taken place with a small staff. Although the study work has taken longer than originally planned, the Department intends to return until the publications work for this site is finished. The aim is not to find new objects or monuments, but to clarify questions left open by the previous team, and to answer questions that have arisen through the current approach to the site. The present volume therefore contains not only old plans, drawings, and photographs, but also new plans and new photographs. Stratigraphic sections and drawings of architectural details have been added. This book, in short, presents the information gained by the original Expedition, seen through the eyes of present-day archaeologists and Egyptologists.

Dorothea Arnold is Lila Acheson Wallace Curator in Charge of the Department of Egyptian Art at The Metropolitan Museum of Art. She is the co-author of" The Royal Women of Amarna: Images of Beauty from Ancient Egypt "and editor of "Ancient Art from the Shumei Family Collection," both published by the Museum.

1. The Pyramid of Senwosret I (THE SOUTH CEMETERIES OF LISHT/THE METROPOLITAN MUSEUM OF ART EGYPTIAN EXPEDITION, VOL 1)

Shipping: US$ 7.43
From United Kingdom to U.S.A.
Destination, rates & speeds

2. The South Cemeteries of Lisht, Volume 1: The Pyramid of Senwosret I

Book Description Metropolitan Museum of Art, 1988. Hardcover. Condition: Very Good. Dust Jacket Condition: Very Good. First Edition. Brown hardback; not showing any snags or splits just ever so mildly bumped at the extremities; complete with original dustjacket, which is very tidy with no tears or chips, just ever so mildly edge-worn now protected in a clear, removable sleeve; contents sound and clean with no pen marks and no loose pages. A very good copy complete with six near fine inserts in the rear pocket. Note: this book once belonged to renowned author and academic M.A.R. Barker and so shows his personal name and ownership details at the endpaper. Seller Inventory # 079248

Shipping: US$ 27.24
From United Kingdom to U.S.A.
Destination, rates & speeds