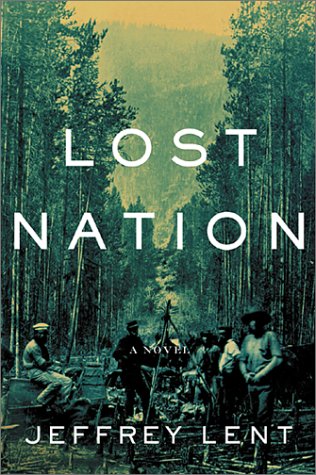 Seeking to make a fresh start and establish himself as a trader, Blood heads for Indian Stream, a wild, ungoverned territory in northern New Hampshire, carrying a load of rum and accompanied by Sally, a young girl won from the madam of a brothel, but their arrival triggers an escalating series of clashes and violence that turns both their lives upside down. 75,000 first printing.

In his second novel, Lost Nation, Jeffrey Lent follows Blood, a mysterious rogue attempting to make a new life for himself in Indian Stream, an ungoverned territory in 19th-century northern New Hampshire. Intending to start a trading business, Blood brings with him rum, supplies, and Sally, a 16-year-old girl he won in a card game from the madam of a brothel. A rugged "man of contradictions," Blood is learned and occasionally kind, yet capable of considerable cruelty and violence. Rumors quickly circulate in Indian Stream regarding his troubled past, and Blood is made a scapegoat when conflicts escalate in the area following his arrival. As Blood's history is gradually revealed, it becomes clear that his only chance at redemption is through confrontation.

Demonstrating his gift for narration, Lent has created a rich and entertaining novel from this somewhat familiar outline, filled with well-developed characters and stark, evocative descriptions. In its epic, unflinching style and omniscient voice, Lent's prose is reminiscent of Cormac McCarthy and Faulkner, to whom he is often compared. Wolves, scoundrels, and barbaric natives abound, and Lent never shies away from the gritty, realistic detail appropriate for the novel's harsh setting. Though light on profundities, Lost Nation should offer readers many engaging reasons to return. --Ross Doll

Jeffrey Lent lives in Vermont with his wife and two daughters. He is the author of In the Fall.

Book Description Atlantic Monthly Press (New York), 2002. Hardcover. Condition: New. Dust Jacket Condition: New. 1st Edition. First printing. Correct number line, including the 1. A fine book in a fine dust jacket. A tight copy, new and unread, without any marks or defects. Dust jacket is clean and bright with price of $25 intact on front flap. Comes with archival-quality dust jacket protector. Shipped in well padded box. SIGNED by author on title page. He has signed his name only, without any other writing or marks. You cannot find a better copy. His second novel. [c3,4]. Signed by Author(s). Seller Inventory # saylor6