Items related to 12,000 Miles in the Nick of Time: A Family Tale

Jacobson, Mark; Jacobson, Rae 12,000 Miles in the Nick of Time: A Family Tale 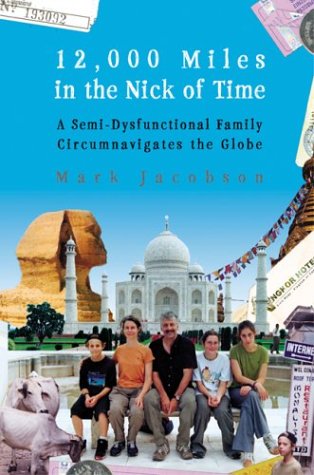 Recounts the author's decision to educate his three children about the world by taking them on a three-month tour of several countries including Thailand, India, Israel, France, and England; a trip during which the family's bonds were tested by cramped vehicles, long train rides, endless walks, and unfamiliar foods.

American pop culture has decimated a formerly rich civilization and left in its evil, McDonald's/TV/CD-driven wake zombified kids and adults with unrefined tastes. So asserts former Village Voice writer Jacobson in this self-congratulatory treatise on how to save one's children from pop-promulgated perdition while also bonding as a family. A parental how-to for upwardly mobile hipsters, the book has no Dr. Phil "just sit down and talk" attack plan. Rather, Jacobson promotes a kind of intellectual Outward Bound program to get one's kids into "The World" and, consequently, another way of thinking. In 2000, Jacobson, his wife and three kids (aged 16, 12 and nine) left cushy Park Slope, Brooklyn, and spent three months traipsing through Asia, the Middle East, England and France. They witnessed funeral pyres burning on the Ganges, Cambodia's Pol Pot museum, religious infighting in Jerusalem, Giza's pyramids and other phenomenal sights. Throughout, Jacobson muses on the meaning of life, in language alternately way cool and smugly anachronistic. An epilogue by his eldest daughter (who's now a college dropout) gives no sense that the trip imparted the meaning her father had envisioned. Alas, the Jacobsons are never true participants on their travels, but mostly voyeurs on an experiential voyage. The book's elitist tone and commentary may leave some readers feeling insulted and perhaps somehow lacking (if they are trying to provide for their children what Jacobson's privileged trio were born to).The irony in Jacobson's memoir is its resemblance to a reality TV series: lots of tell-all revelation with little insight.
Copyright 2003 Reed Business Information, Inc.

Adult/High School--Some families are emotionally closest when they're on the road together, away from home with its variously stressful allegiances and temptations. A few years ago, the Jacobsons, just such a family, spent the summer touring Asia, the Middle East, and part of Europe on the cheap. It wasn't easy to take three middle-class American kids, ages 9 to 16, to Cambodia's Killing Fields, India's Burning Gat, or the sex-shop-strewn thoroughfares of Thailand. The book recounts the many trials, tribulations, and ironies of the trip as well as its more usual wonders. Jacobson writes of the high good humor, unexpected silliness, and rejuvenated familial relationships discovered and encouraged among themselves as well as of disappointments, bouts of selfishness, and related realities of everyday family life. Interspersed with his chapters, which meander back to his boyhood, the early years of his marriage, and school reports produced by his children, and include heady and sensual descriptions of the current journey, is 16-year-old daughter Rae's "backtalk" version of events. Teens who have been coerced into spending time away from home and in the omnipresence of their families will love this book, and armchair travelers will be enchanted by its proffered treasures--and turds--from abroad.--Francisca Goldsmith, Berkeley Public Library, CA
Copyright © Reed Business Information, a division of Reed Elsevier Inc. All rights reserved.