Items related to Who Did What to Whom? Planning and Implementing a Large...

Ball, Patrick Who Did What to Whom? Planning and Implementing a Large Scale Human Rights Project

Who Did What to Whom? Planning and Implementing a Large Scale Human Rights Project 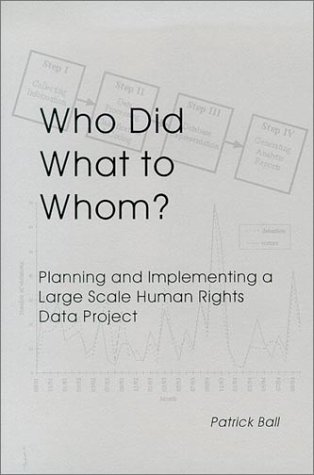 This handbook has grown out of work I've done over the last five years in human rights information management. The two projects I worked with that have most directly influenced the ideas here were 1) work with the non-government Human Rights Commission of El Salvador (CDHES) in 1991 - 1992, and 2) work with the Haitian National Commission for Truth and Justice (CNVJ) in 1995. Although the technology -- both hardware and software -- has advanced tremendously, and the political contexts have varied widely in the six countries to which this work has taken me, the key issues have remained the same because the question at the root of this exercise is the same: Who did what to whom?

This handbook has benefited enormously from criticism, advice, assistance, and urging by others, including Dr. Audrey R. Chapman, Director of the AAAS Science and Human Rights Program, who asked me to write something like this book over a year ago. I would like to thank explicitly Dr. Francoise Bouchard (President, Haitian National Commission for Truth and Justice) and the Junta Directiva of the non-government Human Rights Commission of El Salvador (CDHES) for their permission to use examples from the work we did together.

Patrick Ball, Ph.D., is Deputy Director of the American Assocation for the Advancement of Science (AAAS) Science and Human Rights Program. Since 1991, he has designed information management systems and conducted quantitative analysis for large-scale human rights data projects for truth commissions, non-governmental organizations, tribunals and United Nations missions in El Salvador, Ethiopia, Guatemala, Haiti, South Africa, and Kosovo. His 1997 Ph.D. dissertation ?Liberal Hypocrisy and Totalitarian Sincerity? examined the roots of the non-governmental human rights movements in Ethiopia, Pakistan, and El Salvador. AAAS has published two previous books by Dr. Ball: Who Did What to Whom? Planning and Implementing a Large Scale Human Rights Data Project (1996), and State Violence in Guatemala, 1960-1996: a Quantitative Reflection (1999, with Paul Kobrak and Herbert F. Spirer).