Items related to The World of Castles and Forts

Day, Malcolm The World of Castles and Forts

The World of Castles and Forts 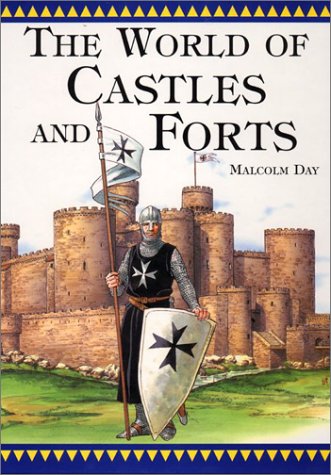 Have you ever thought about what might be happening beneath your feet?

Do you stop to think that there may be a whole amazing world of activity going on down there?

This book gives you the opportunity to find out just how many different ways people have used the earth, from prehistory to the present day. Discover how and why they have explored it, mined it, lived in it, fought from it and traveled through it. Look beneath the cover to find out how medieval soldiers ‘undermined’ their enemies and to explore what lies beneath New York City’s 500,000 manhole covers.

Grade 5-8. This history of castles and forts is also a history of war and humanity's ingenious attempts at protecting themselves from their enemies. This scope, much broader than in other books on castles, makes the title fascinating reading. Even though the text is brief and often cursory, it includes such intriguing facts as the reason that spiral staircases in castles were always built counterclockwise (so that defenders could swing their sword arm as they descended the stairs). Presented in chronological order, such varied structures as Mycenae, the Great Wall of China, Masada, and the Maginot Line are included. Each chapter or subject is handled on a double-page spread with brief text and numerous colorful drawings partnered with informative captions. When a specific fortress or castle is discussed, a small inset map of its location is presented. While the writing is straightforward and clear, some of the captioned material is occasionally repetitive. As a brief overview of a huge topic, this book will be popular with young readers.?Rosie Peasley, Empire Union School District, Modesto, CA
Copyright 1997 Reed Business Information, Inc.

Gr. 4^-6. The subject of this slender, large-format book is somewhat broader than its title indicates, for as the author states in the introduction, "From early times, people have built protection around them." On the double-page spreads that follow, many kinds of fortification are discussed, from walled cities to missile defense systems. Included are the ancient walled city of Mycenae, the Great Wall of China, the fortress of Masada, medieval castles in Europe, a seventeenth-century castle in Japan, trench warfare during the American Civil War, the Maginot Line in France, and the nuclear age. Each spread includes several illustrations, with many ink-and-watercolor illustrations as well as a few maps, diagrams, and photographs. The book's British origin is evident in the space devoted to topics such as Henry VIII's forts, and British defenses during World War II, yet the worldwide scope could make it useful to American students. Carolyn Phelan

1. THE WORLD OF CASTLES AND FORTS

2. The World of Castles and Forts Day, Malcolm