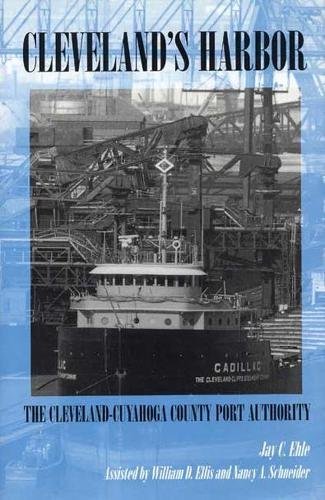 On July 22, 1796, General Moses Cleaveland established the mouth of the Cuyahoga River as the port of entry for the Ohio frontier.  He could not have foretold the developments that would turn this hostile marsh into Thriving economic and community center.  With its 200th anniversary, the port, now governed by the Cleveland-Cuyahoga County Port Authority, is home to the Rock & Roll Hall of Fame, the future Great Waters of the World Aquarium, and the Great Lakes Science Museum, as well as a Foreign Free-Trade Zone.

Cleveland's Harbor chronicles the challenges, struggles, and politics of establishing and maintaining this major port - from General Cleveland to Mayor Michael White.  Among those whose dedication and ingenuity fostered the port were Lorenzo Carter, who cultivated the first settlement; Levi Johnson and the Turhooven brothers, builders of The Enterprise - Cleveland's first commercial vessel; Alfred Kelley, Governor Ethan Allen Brown, and Micajah Williams, who were instrumental in getting the canal built connecting Lake Erie to the Ohio River; John Malvin, a freedman, who became the first black vessel owner, a captain, and minister for the First Baptist Congregation; Eli Peck, designer of the forerunner of the classic ore boat; Alexander McDougall, who fashioned the innovative shaleback hull; and George Hulett, who, with the support of Andrew Carnegie and Charles Schwab, revolutionized harbor operations with his invention of the unloader.

In 1958, the St. Lawrence Seaway was completed and Congress officially classified the Great Lakes as the Fourth U.S. coastline.  The Cleveland-Cuyahoga County Port Authority, consisting of appointed civic leaders from various backgrounds, was created a decade after the opening of the Seaway to direct the economic development of the lakefront and increase commerce.  Today, the Port Authority faces new challenges in its continued commitment to enrich the Cleveland-Cuyahoga County region.