Items related to The Encyclopedia of Professional Wrestling: 100 Years...

The Encyclopedia of Professional Wrestling: 100 Years of History, Headlines & Hitmakers 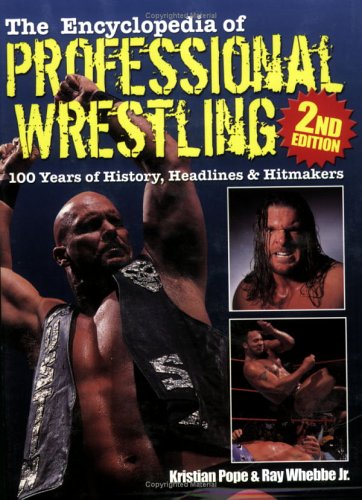 The second edition of this entertaining retrospective of professional wrestling features one thousand new photographs as well as coverage of more than five hundred wrestlers, highlighting ring names, aliases, career highlights, and best matches, as well as famous matches by Andy Kaufman, Muhammed Ali, and others. Original.

Kristian Pope, a life-long wrestling fan, began writing about the sport as a teen-ager and has published numerous wrestling fanzines since the 1980s. A sportswriter, he has worked for the St. Paul Pioneer Press, Dallas Morning News, Asbury Park Press, and Philadelphia Inquirer. Ray Whebbe Jr., a fan of wrestling since the 1960s, has been a promoter of more than 1,000 wrestling matches. He is also a sportswriter in the Twin Cities, having written thousands of articles in the early 1980s.

1. The Encyclopedia of Professional Wrestling: 100 Years of History, Headlines & Hitmakers

3. The Encyclopedia of Professional Wrestling: 100 Years of History, Headlines & Hitmakers