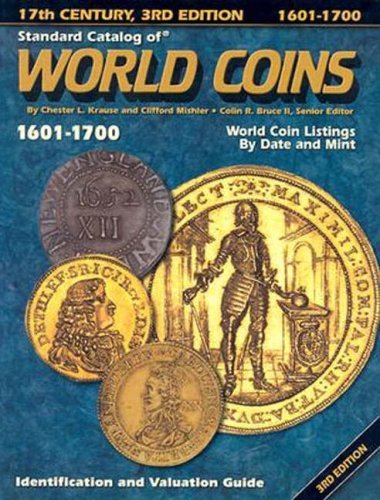 Chester L. Krause started Krause Publications in 1952 with the first issue of Numismatic News. In 1972, he and Clifford Mishler coauthored the company's first book, Standard Catalog of World Coins. This hobby standard launched the beginning of book publishing at Krause Publications, sparking the flame that would help create the world's largest hobby and collectibles publisher. Since 1952, Chet has been a steadfast figure in the numismatic world. Clifford Mishler joined the company as a member of the numismatic editorial staff in 1962. He has served on the U.S. government's annual Assay Commission and on the Coins and Medals Advisory Panel of the American Revolution Bicentennial Commission. In 1984, the American Numismatic Association recognized his lifelong dedication to numismatics and presented its highest honor to him, the Farran Zerbe Memorial Award. Employed at Krause Publications since 1975, Colin R. Bruce II oversees production of all numismatic catalog titles that relate to foreign coins and paper money. He has earned 16 awards from Numismatic Literary Guild for his work. Other books he has contributed to include all editions of Standard Catalog of? World Paper Money, Collecting World Coins, and Standard Catalog of World Gold Coins.

Book Description Krause Publ, 2003. Condition: Good. A+ Customer service! Satisfaction Guaranteed! Book is in Used-Good condition. Pages and cover are clean and intact. Used items may not include supplementary materials such as CDs or access codes. May show signs of minor shelf wear and contain limited notes and highlighting. Seller Inventory # 0873496663-2-4

Book Description Krause Publ, 2003. Paperback. Condition: GOOD. Has little wear to the cover and pages. Contains some markings such as highlighting and writing. Seller Inventory # 0873496663_abe_gd

Book Description Krause Publ 2003-12-01, 2003. Paperback. Condition: Good. Item is in good condition. Some moderate creases and wear. This item may not come with CDs or additional parts including access codes for textbooks. Might be an ex-library copy and contain writing/highlighting. Seller Inventory # DS-0873496663-3

Book Description . Paperback. Condition: Very Good. The book has been read, but is in excellent condition. Pages are intact and not marred by notes or highlighting. The spine remains undamaged. Seller Inventory # GOR005936423