Items related to Spirit Car: Journey to a Dakota Past

Wilson, Diane Spirit Car: Journey to a Dakota Past

Spirit Car: Journey to a Dakota Past 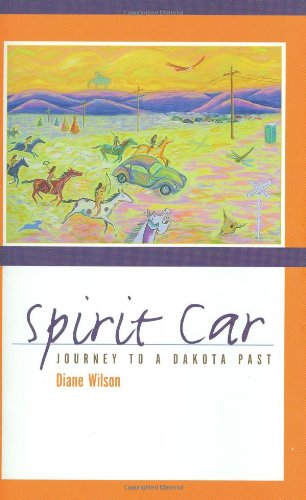 One day I realized that my entire back seat was filled with relatives who wondered why I wasn’t paying more attention to their part of the family story. . . . Sooner or later they all come up to the front seat and whisper stories in my ear.  Growing up in the 1950s in suburban Minneapolis, Diane Wilson had a family like everybody else’s. Her Swedish American father was a salesman at Sears and her mother drove her brothers to baseball practice and went to parent-teacher conferences. But in her thirties, Diane began to wonder why her mother didn’t speak of her past. So she traveled to South Dakota and Nebraska, searching out records of her relatives through six generations, hungering to know their stories. She began to write a haunting account of the lives of her Dakota Indian family, based on research, to recreate their oral history that was lost, or repressed, or simply set aside as gritty issues of survival demanded attention.  Spirit Car is an exquisite counterpoint of memoir and carefully researched fiction, a remarkable narrative that ties modern Minnesotans to the trauma of the Dakota War. Wilson found her family’s love and humor—and she discovered just how deeply our identities are shaped by the forces of history.

Diane Wilson is a freelance writer and editor. She lives in Shafer, Minnesota.

This moving narrative recounts Wilson's attempt to trace her Dakota heritage, sparked by her usually reticent mother's story of having been left for two years at a mission boarding school on the Pine Ridge Reservation. Though her own family stories have been forgotten or repressed, Wilson relies on carefully researched historical accounts and her own imagination to depict how her Native American ancestors survived the Dakota War of 1862. Rosalie, the wife of a French-Canadian and a mother of seven, exemplifies the anguish of her family members forced to defend themselves from Dakota relatives bent on killing whites and their "half-blood" children. When the conflict ended, upwards of two thousand Dakota people, mainly women and children, gave themselves over to the U.S. government, marching over 150 miles through Minnesota to reach a camp where more than 130 would perish from exposure to cold and disease. In the most moving passages, Wilson returns to participate in a commemorative march in her ancestors' footsteps. Though she can get mired in explaining various familial ties, Wilson convincingly asserts that "our daily lives are only the tip of the mountain that rises above hundreds of years of generations whose experience, acknowledged or not, has everything to do with the people we become." 18 b&w photos. (Aug. 1)
Copyright © Reed Business Information, a division of Reed Elsevier Inc. All rights reserved.

1. Spirit Car: Journey to a Dakota Past

2. Spirit Car: Journey to a Dakota Past

3. Spirit Car: Journey to a Dakota Past

4. Spirit Car: Journey to a Dakota Past

5. Spirit Car: Journey to a Dakota Past Wilson, Diane