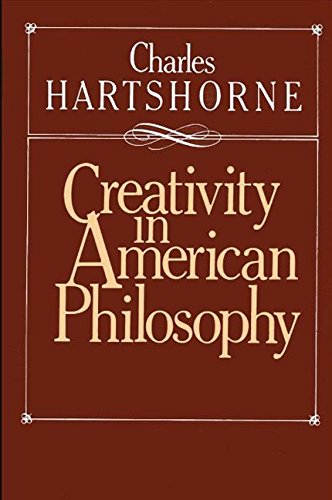 "The reader will find that I combine hearty enthusiasm for the philosophical traditions of my country with sharp partial disagreement with nearly all their representatives. My effort throughout my career has been to think about philosophical, that is, essentially a priori or metaphysical, issues, using the history of ideas as a primary resource.

"This is the second of two volumes dealing with the history of philosophy, especially of metaphysics. The first, Insights and Oversights of Great Thinkers, discusses some thirty European philosophers, from Democritus to Wittgenstein and Merleau-Ponty. In both volumes I try to learn and teach truth about reality by arguing, in a fashion, with those who in the past have sought such truth." -- Charles Hartshorne In a remarkable tour de force, Charles Hartshorne presents a lively and illuminating study of what major American philosophers have said about creativity. With a special talent for perceiving and elegantly expressing the essence of a position, Dr. Hartshorne details his reactions to friend and foe, demonstrating that philosophy at its best is dialogue. Noting that metaphysics is a major theme in the American philosophical tradition, he states that "nowhere has the topic been more persistently and searchingly investigated than in this country."

Charles Hartshorne is the author of Omnipotence and Other Theological Mistakes.Whitehead’s Philosophy, Creative Synthesis and Philosophic Method, A Natural Theology of Our Time, and The Logic of Perfection and Other Essays in Neoclassical Metaphysics, also published by SUNY Press. Dr. Hartshorne is past president of the Western Division of the American Philosophical Association, the Metaphysics Society of America, the Charles Peirce Society, the Society for Philosophy of Religion, and the Southern Society for Philosophy and Psychology.

Book Description State University of New York Press. Hardcover. Condition: Good. A copy that has been read, but remains in clean condition. All pages are intact, and the cover is intact. The spine may show signs of wear. Pages can include limited notes and highlighting, and the copy can include previous owner inscriptions. An ex-library book and may have standard library stamps and/or stickers. At ThriftBooks, our motto is: Read More, Spend Less. Seller Inventory # G0873958160I3N10

Book Description Brand: State Univ of New York Pr, 1985. Hardcover. Condition: GOOD. Has little wear to the cover and pages. Contains some markings such as highlighting and writing. Supplemental materials are not guaranteed with any used book purchases. Seller Inventory # 0873958160_abe_gd

Book Description SUNY Press, 1985. Condition: Good. A+ Customer service! Satisfaction Guaranteed! Book is in Used-Good condition. Pages and cover are clean and intact. Used items may not include supplementary materials such as CDs or access codes. May show signs of minor shelf wear and contain limited notes and highlighting. Seller Inventory # 0873958160-2-4