Items related to After The Boom In Tombstone And Jerome, Arizona: Decline...

After The Boom In Tombstone And Jerome, Arizona: Decline In Western Resource Towns (Shepperson Series in History Humanities) 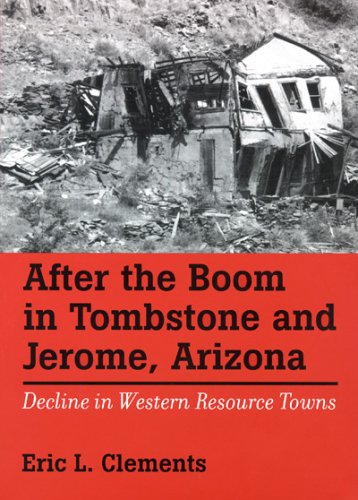 The literature of the West abounds with colorful sagas of mining boomtowns that sprang up after the discovery of an important mineral deposit, but the decline of those towns is rarely treated as more than an epilogue to the story. Focusing on two Arizona towns that had their origins in mining bonanzas--Tombstone and Jerome--historian Eric L. Clements offers a rare study dissecting the process of bust itself--the reasons and manners in which these towns declined as the mining booms ended.

Tombstone was the site of one of the great silver bonanzas of the nineteenth century, a boom that started in the late 1870s and was over by 1890. Jerome's copper deposits were mined for much longer, beginning in the 1880s and enduring until the 1930s. But when the mining booms ended, each town faced its decline in similar ways.

Clements describes the towns at their peaks, the nature of the mines and the diverse populations that came to work in the mines or in the business of the towns, the development of civic organizations and amenities like libraries, and the role of mining companies. The process of decline was more complex than superficial histories have indicated, and Clements discusses the role of labor unions in trying to stave off collapse, the changing demography of decline, the nature and expression of social tensions, the impact on institutions such as churches and schools, and the human responses to continued economic depression. But bust involved more than a steady decline into ghost-town status, Clements discovers: the towns' remaining residents employed countless strategies to survive and reduce household expenses, and community organizations developed relief programs to help the most needy and wide efforts to diversify their economies. In the end, both towns reinvented themselves as ! late-twentieth-century tourist attractions.

"After the Boom in Tombstone and Jerome, Arizona" describes in vivid detail the decline of two major mining boomtowns. It also addresses significant questions about the nature of capital and settlement in the mining West, and about the characteristics of town building and survival. This is a major contribution to the history and interpretation of the American West, meticulously researched, astutely argued, and extremely readable.

Eric L. Clements is assistant professor of history at Southeast Missouri State University and editor of the Mining History Journal. His areas of interest include both the mining and maritime history of the American West. He has published articles and given presentations on mine health and safety reform, the Western Federation of Miners, the nature and meanings of ghost towns, and the social and physical consequences of legalized casino gambling in three former mining towns in Colorado

""In the first in-depth study of mining-camp bust, Eric L. Clements presents with clarity and wit the long down-spiraling tale of two former bonanza camps: Jerome, the 'Billion Dollar Copper Camp, ' and legendary Tombstone, 'the Town Too Tough to Die.' After the Boom in Tombstone and Jerome, Arizona "deserves a spot on the shelf of all who wish to understand the economic and social fabric of the American mining west."

1. After The Boom In Tombstone And Jerome, Arizona: Decline In Western Resource Towns

2. After The Boom In Tombstone And Jerome, Arizona: Decline In Western Resource Towns (Shepperson Series in History Humanities)

4. After The Boom In Tombstone And Jerome, Arizona: Decline In Western Resource Towns (Shepperson Series in History Humanities)