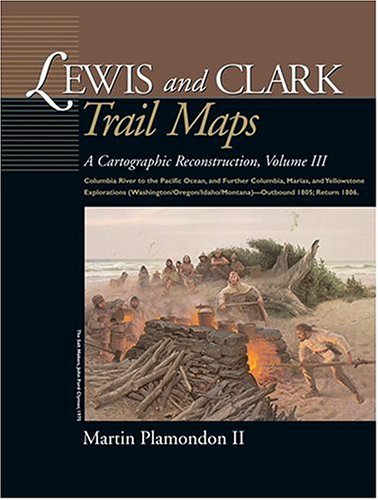 After crossing the Bitterroot Range and canoeing down the cataract-filled Snake River, the Corps of Discovery finally reached the long-sought Columbia River in the autumn of 1805. Volume III continues the cartographic reconstruction of the explorers’ trek as they set out from the Snake-Columbia junction, October 18, 1805, on the final leg of their journey to the sea.

In addition to intricately mapping the Columbia’s great rapids, desert and rain-forest shorelines, spectacular mountain gorge, and broad estuary, Volume III reveals the vast number of Native American villages that lined the River of the West in Lewis and Clark’s time. Additional maps and illustrations depict the Fort Clatsop winter quarters, Cascade volcanoes, coastal explorations, compares the modern beds of streams to their courses at the time of the exploration, and more.

Though having reached their primary goal, the Pacific Ocean, the expedition’s investigation of new terrain in western North America was far from over. Volume III outlines the significant discoveries recorded as they returned eastward in 1806 through the broad Columbia, Marias, and Yellowstone watersheds, and concludes when the Corps of Discovery, long given up for dead by most Americans, paddled up to the St. Louis waterfront on September 23, 1806, to an arousing reception by the local population. Of further special interest in this volume are the many excerpts from the expedition diaries. In addition to presenting key geographic and historic features, the maps compare the modern beds of streams to their courses at the time of the exploration. The contrast is striking between what Lewis and Clark saw and what we see today. The ever-meandering Missouri River, in particular, has changed its channel hundreds of times. The impact of modern America likewise has wrought great change. This careful cartographic reconstruction is a captivating and never-before-seen record of the American West.

During the Corps of Discovery’s 1804–06 trek, Captain William Clark used surveying instruments to measure the expedition’s traverse to the Pacific Ocean and back—an astounding distance of 7,000 miles. Clark assumed that this painstakingly recorded traverse would be converted to well-crafted, accurate maps by cartographers soon after the journey’s completion. Yet for nearly two centuries, Clark’s invaluable survey data remained untapped in the expedition’s annals. Now, for the first time, Martin Plamondon II has accomplished the cartographic reconstruction that Clark expected. By using the daily measurements and notes in Clark’s journals, as well as sketches other pertinent sources, Plamondon has created spectacular full-page maps depicting the Corp’s route, now portrayed from beginning to end throughout the three volumes.

Martin Plamondon II was a former county director of mapping and served as chairman of the Governor’s Washington Lewis and Clark Trail Committee. His long-term research in exploration history and twenty-eight years of experience as a professional cartographer provided the exceptional skills required to complete the trail maps.

Book Description Washington State Univ Pr, 2004. Condition: Good. A+ Customer service! Satisfaction Guaranteed! Book is in Used-Good condition. Pages and cover are clean and intact. Used items may not include supplementary materials such as CDs or access codes. May show signs of minor shelf wear and contain limited notes and highlighting. Seller Inventory # 0874222664-2-4

Book Description Washington State Univ Pr, 2004. Paperback. Condition: GOOD. Has little wear to the cover and pages. Contains some markings such as highlighting and writing. Supplemental materials are not guaranteed with any used book purchases. Seller Inventory # 0874222664_abe_gd

Book Description Washington State Univ Pr, 2004. Paperback. Condition: VERY GOOD. Pages are intact and are not marred by notes or highlighting, but may contain a neat previous owner name. The spine remains undamaged. Supplemental materials are not guaranteed with any used book purchases. Seller Inventory # 0874222664_abe_vg