Items related to America Discovers Columbus: How an Italian Explorer... 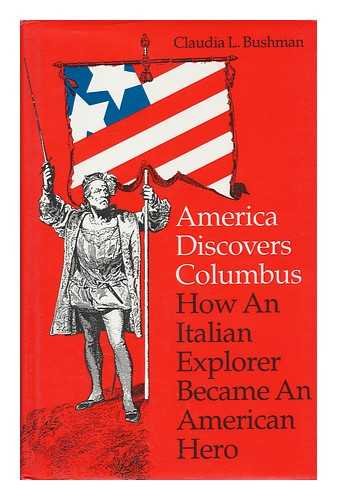 A witty and perceptive analysis of the rise, decline, and curious resilience of a national metaphor; by Bushman (A Good Poor Man's Wife, 1981--not reviewed). Concentrating on ``the idea of Columbus'' in the American imagination, Bushman bypasses debates about the man to focus on the mechanisms of popular mythologizing. Not that the author has any quarrel with revisionists--the admiral himself, in Bushman's review of known facts, emerges as arrogant, intolerant, and mercenary, albeit brave and persistent. How, then, did Columbus come to be embraced by a nation he had neither ``ventured to nor dreamt of''? Apparently, American infatuation with the explorer was an accident of literary timing, the main culprit being Scotsman William Robertson's depiction in his 1777 History of America of a heroic visionary tragically misunderstood by ungrateful monarchs. Widely circulated among the similarly aggrieved colonials, this view of Columbus was not only an apt mirror for American interests but, even better, ``provided a past that bypassed England.'' In a wide- ranging survey of late-18th- and early 19th-century literary, artistic, pedagogical, and commemorative products, Bushman traces the growth of an ``all-purpose symbol,'' with the real person quite beside the point. Particular emphasis, in keeping with this year's quincentennial, is paid to the 1792 and 1892 celebrations--the first largely orchestrated by N.Y.C.'s later notorious Society of Tammany, the second a national sensation centered on Chicago's Columbian Exposition. Although Bushman can get ponderous about symbolism (``what we think of Columbus reflects what we think of ourselves''), her thoughtful angle on a controversial subject provides a refreshingly balanced and wonderfully readable slice of American intellectual history. Timely and insightful--a well-rounded contribution to an often flat debate. (Fifty-two illustrations--not seen.) -- Copyright ©1992, Kirkus Associates, LP. All rights reserved.

This well-written and entertaining book explores the history of "what Americans have thought about Columbus." The commemorations of 1792 and 1892, the literature written for schools, Columbus iconography, and Columbus in poetry are among the subjects illustrating how each generation has shaped this historical figure for its own needs and purposes. Bushman ( Mormon Sisters , Olympus Pub., 1980) succeeds in placing the current quincentennial debate over the explorer's legacy within a broader historical context. Among so many recent works about Columbus, this title focuses on a unique aspect, although John Noble Wilford's The Mysterious History of Columbus ( LJ 10/15/91) partially deals with the same material. Recommended for academic and public libraries.
- William F. Young, SUNY at Albany Lib.
Copyright 1992 Reed Business Information, Inc.