Items related to The Valleys of the Assassins and other Persian Travels... 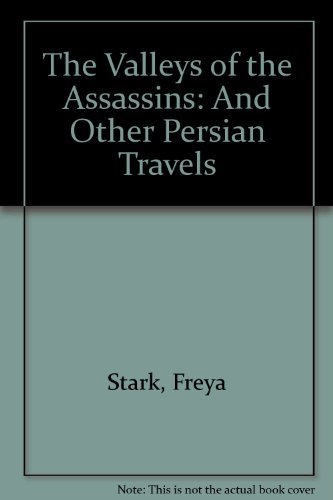 Review:
First published in 1934, Freya Stark's classic tale of her travels through Persia has been reprinted once again and is just as much a gem now as when first published. At the age of 37, Stark shocked her fellow Brits by moving to Baghdad, befriending the locals, studying Arabic and the Koran, and then setting out on expeditions to remote and uncharted areas of the Islamic world by foot, donkey, camel, and car. With her fascination for secret Islamic societies, she resolved to travel to the former home of the Cult of the Assassins and to locate an ancient fortress described by Marco Polo. (The founder of the cult inspired his recruits to murder through the use of hashish, hence their name Hashishin, from which we get assassin.) There was only one problem: she couldn't find the valley on her map. Intrepid and indefatigable, she found a guide to lead her across the empty Persian plains and crested mountain ranges (Stark leaping like a mountain goat while her guide huffed behind) into the practically impregnable valley. There she found the castle ruins covered with wild tulips and surrounded by breathtaking views of the Elbruz Mountains. While there, Stark charted the first accurate maps of the region. Stark also used her charm and her understanding of Persian ways to infiltrate Luristan, a dangerous and forbidden place where she hunted for Neolithic bronzes (by persuading the chief of police to help her loot graves) and searched for buried treasure. The Lurs, a mountainous tribe, were infamous for murder and thievery, but she found them "as cheerful a lot of villains as you can wish to meet, and delighted with us for being, as they said, brave enough to come among them." The Lurs were consistently generous hosts, but thought nothing of raiding her luggage while she slept (stealing being their national pastime and hence nothing to get upset about). While Stark began as an obscure and idiosyncratic adventurer, she was ultimately backed by the Royal Geographic Society, was considered one of the best adventure writers of the century, and even was knighted by the queen of England. With her lively voice and natural perceptiveness she painted a picture of a fascinating world inhabited by charming bandits and armed tribesman now largely gone. While she did it for her own pleasure, in the end, the pleasure is ours. --Lesley Reed
From the Publisher:
8 1.5-hour cassettes

THE VALLEYS OF THE ASSASSINS AND