Items related to W. Norman Cooper - A Prophet for Our Time

Filip Field W. Norman Cooper - A Prophet for Our Time

W. Norman Cooper - A Prophet for Our Time 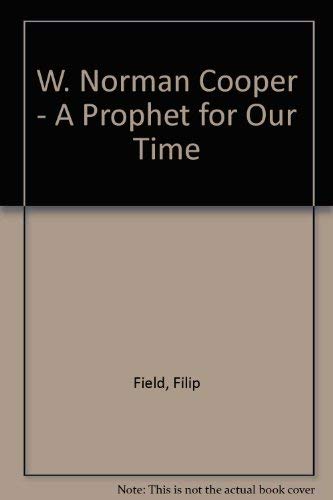 In this little book, Filip Field has set down some reminiscences about his long association with a man who, by any standards, must prove to be one of the most interesting individuals alive today. The book is written in a semi-casual style, as a letter to a close friend about a very serious subject.

The author states that "Master Cooper," as he calls him, is one who has given over the whole of his existence to the expression of selfless love for mankind. Field relates how he first came across Dr. Cooper in Los Angeles, and how he, Cooper, was at that time just resigning from an exalted position in a world-wide church organization.

Quoting from the book: "[Dr. Cooper] said he realized God was demanding that he must serve Him free from the encumberments of organized religion; and so in 1965, he withdrew entirely from church organization. It was after this withdrawal that he 'went to the mountain- top,' as he put it. He made himself incommunicado, cut off all ties and spent three years in silent meditation 'just listening.'" Field says that later Dr. Cooper began quietly teaching and sharing with his students "some of the good that had been unfolding to him while he was praying in the wilderness."

The author touches upon what Dr. Cooper's unique teaching is--that of Intuitive Awareness--the finding of one's divine Self; but Field is chiefly concerned with giving some insight into his Master's life. Some of the incidents he relates are no less than mind boggling.

Filip Field was a native of Mississippi, but spent his adult life in California. He was an accomplished actor and painter.

But it was his search for the meaning to life which was most important to him. As part of his search he met W. Norman Cooper.

In the introduction to his book, "W. Norman Cooper, a Prophet for Our Time." Mr. Field tells of his first meeting: "I knew in my heart that I had always been in a desolate place, spiritually, and all my perceptions told me that here was someone who knew the way out."

Filip Field became a student of W. Norman Cooper and one of his close and valued co-workers in the work of Truth Center, which Dr. Cooper founded to share his teachings throughout the world.

For a number of years, Filip Field handled the correspondence which Truch Center received from many countries. He made a trip to India to share the Truth he had gained from his teacher.

1. W. Norman Cooper - A Prophet for Our Time (Hardback)

2. W. Norman Cooper - A Prophet for Our Time (Hardback)