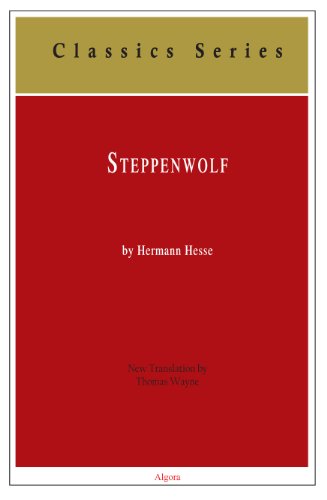 Hesse's classic story, a potent combination of Eastern and Western insights into the human search for meaning, raises issues that are perhaps more important in our current cultural climate than ever before. Steppenwolf, first published in German in 1927, is given new life in this fresh translation.
Thomas Wayne presents a contemporary take on the lone individual lost in the ironic good fortune and security of bourgeois banality and cultural conformity. Harry Haller, the hero, has all the insight, all the leisure, all the material goods he needs, yet he is not at peace with his life and decides to commit suicide. Then Hermine and her friends open to him the countless pathways of self-discovery.
Basil Creighton's 1929 translation (revised in 1963 by Joseph Mileck) is the best-known version in English; it skips words, smoothes out long, involved passages, unnecessarily improves the text all things Thomas Wayne refuses to do. He emphasizes a strict adherence and reverence for the literal -- a Hesse for the 21st century, meaningful and faithful to the original.

The author is a poet and novelist known for his stark explorations of the individual's spiritual search and the striving for a life of virtue, justice and understanding within the restrictions of society. Several of Hesse's novels are centered on the protagonist's journey into the inner self, with a spiritual guide who assists in his quest for self-knowledge and shows the way beyond the world "deluded by money, number and time." Hesse was awarded the Nobel Prize for Literature in 1946.
Hesse was born in the German state of Wurttemberg. His father was born a Russian citizen in Weissenstein, Estonia; his mother spent her early years in Talatscheri, India. Both parents served as missionaries in India, and these diverse cultural currents infuse his writing with unusual flavor.

The translator, Thomas Wayne, is an English Professor at Edison College in Fort Myers, Florida. He has published two translations of Nietzsche's classics with Algora Publishing, as well as Hesse's much loved Steppenwolf. His approach in translating these iconoclastic German powerhouses is to return the juice the authors originally intended, the verve and dynamic energy.

Among the themes he successfully weaves together into a universal fabric are Nietzschean philosophy, depth psychology, and Buddhism. Over the course of his narrative, Hesse s main character and alter-ego experiences his over-analyzed but poorly understood self through the lens of life's great paradoxes. Thus, the storyline swirls through sensuality to find spirit, it dismantles the personality to promote a greater synthesis, and it bridges the divide between the temporal and eternal. For this reason, Steppenwolf is still the kind of literature which can enrich the individual experience by pointing us back toward that added dimension. Read it, and you are invited on journey of renewal, on a quest for meaning in an age in which such is increasingly hard to find.

It is our good fortune to have this new translation of the work from Dr. Thomas Wayne. As he shows in his work here, there must be a proper balance of faithfulness to both the style and substance of the original. Basil Creighton s 1929 translation of Steppenwolf into English, and the 1963 revision based upon it, simply omit certain elements. In these earlier, bowdlerized versions, precision has been unduly sacrificed to readability. Dr. Wayne succeeds in giving the reader as much of Hesse s actual language, in both its rhythm and its content, as a translation can allow. Now is the time to either discover or revisit this early twentieth-century classic. --Dr. Russell H. Swanson