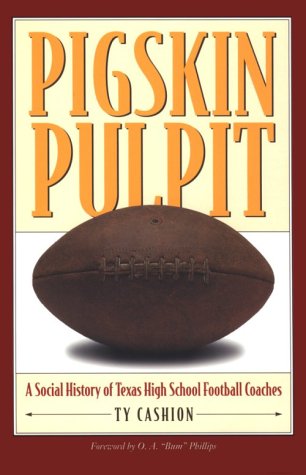 High school football is one of the identifying institutions of twentieth-century Texas. It is not unusual to see youthful football players placed on the same pedestal as the cowboy, oil man, or other icons of the Lone Star State. In fact, it is shaped in the image of its coaches who are, by and large, an enigma to most of us. We think of them as caricatures, men who are alternately revered and vilified (usually depending on how many games they have won recently), but they have always been members of a traditional, closed society, and we do not really know them in their complexities.

Pigskin Pulpit opens the Texas high school coaching profession to historical scrutiny for the first time, examining this breed of men who shaped the game—and generations of players—in their own images. Tracing side-by-side the development of the game and the coaching profession from its beginnings to today, author Ty Cashion explains how this avocation wove itself so tightly into the fabric of Texas culture.

Football fans and critics of the game alike will be drawn into this probing, analytical study that is sure to become a Texas classic.

TY CASHION, the author of many books and articles on Texas history and culture, is professor of history at Sam Houston State University in Huntsville.