Items related to Count Your Way Through Greece

Count Your Way Through Greece 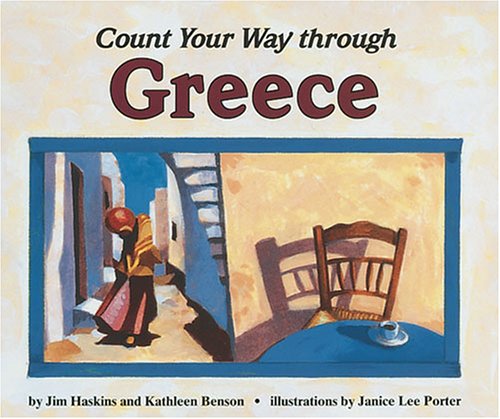 Uses the Greek words for the numbers from one to ten to introduce the land, history, and culture of Greece

Learning to count in Greek is now as easy as one, two, three, in this entry in the Count Your Way series; Haskins and Benson use the numbers one through ten to expound on Greek history and culture. An introductory note explains the history of the Greek alphabet and its influence on contemporary English, then it's on to the digits. Each number is written in Greek and phonetically in English. While some of the subjects relate directly to the number assigned (five, for example, represents the circles that make up the Olympic symbol), others are more arbitrary. One represents Greek Orthodoxy--the only official religion of Greece; six stands for the ``most important'' Greek deities (on whose list?), and ten represents ``ten animals featured in Aesop's fables.'' (Aesop included more.) The structure works well as a means for presenting a smattering of Greek culture, but will be confusing if readers assume the number is intrinsically linked with the subject depicted. Porter's impressionistic illustrations aptly reflect the powdery whites of limed walls and the soothing blues of the Aegean. This book's like a whiff of moussaka: tantalizing, but leaves one craving more. (Picture book/nonfiction. 6-9) -- Copyright ©1996, Kirkus Associates, LP. All rights reserved.

Grade 2-5?This book delivers concise, interesting information on aspects of Greek life. The simple facts, all linked to the Greek numbers 1-10, cover a wide range of territory and provide an excellent basic picture of the country. Unfortunately, Pericles and Phidias (whose names are inextricably linked with the Acropolis) are not mentioned on the page about the Parthenon. Also, it is a bit misleading to say that the ancient Greeks were pioneers in four areas of scholarship, omitting by implication architecture, sculpture, and literature, to name a few. However, these omissions are understandable, due to the rigid format that imposes limitations on the text. Overall, the selection of facts is very good. In some cases, pronunciation and accent guides for words and names of gods are Anglicized versions rather than the true Greek pronunciations, but they will probably be more familiar to children. Porter's paintings capture the sunlit landscape perfectly. A pleasing effort that will be enticing for browsing as well as for homework assignments.?Judith Constantinides, East Baton Rouge Parish Main Library, LA
Copyright 1998 Reed Business Information, Inc.

1. Count Your Way Through Greece

2. Count Your Way Through Greece